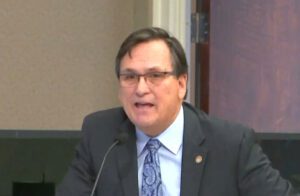 An elections fraud complaint has been filed against Orange County Supervisor of Elections Bill Cowles, who also remains under additional pressure from whistleblower claims. The state of Florida has confirmed they are reviewing the complaint, which was received in September. West Orlando News recently obtained the complaint, which is available below, from the Department of State.


The complaint, filed by John MacDonald, alleges that votes were “manipulated electronically by the Supervisor or with his knowledge.” It continues to allege that “additionally a large ‘dump’ of votes came in from Orange County at the end of FL11 race (after noticeable delay),” which the complaint says changed the race in favor of the establishment candidate. “The dump was clearly orchestrated after officials determined how many votes were needed to change the race,” the complaint says. Florida’s 11th congressional district’s Republican primary was between incumbent Rep. Daniel Webster and controversial challenger Laura Loomer.

“The Department has received voter fraud complaints,” said Mark Ard, Director of External Affairs at the Department of State, who sent West Orlando News a copy of this complaint. “Those complaints are under review.”

That accusation described in the MacDonald complaint sounds similar to one made by Democrat Cynthia Harris, who was a candidate for Orange County Commissioner in District 6. Two days after Election Day, Cowles changed the vote total and ended up putting the third place candidate, Michael “Mike” Scott, into second place by one single vote, qualifying him for the November runoff against leading candidate Lawanna Gelzer. Scott, who did not have much support in August, now has nearly all of Orlando’s political establishment support in an attempt to stop longtime community activist Gelzer.

MacDonald’s complaint says that he is a “Ph.D. and Professional Engineer,” who worked for many years in data analysis, does admit that his evidence is circumstantial so far, but he includes a graph he says shows the late night questionable vote dump.

Here’s a copy of the elections fraud complaint filed against Supervisor Bill Cowles that the state of Florida is reviewing:

There is a second elections fraud complaint against Supervisor Cowles that is also under review by the state of Florida.