Another Elections Fraud Complaint Against Supervisor of Elections Cowles 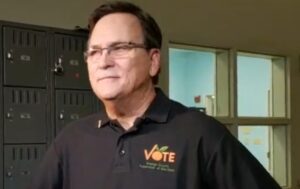 The state of Florida has informed West Orlando News that another elections fraud complaint against Orange County Supervisor of Elections Bill Cowles is “under review.” Supervisor Cowles finds himself under increased pressure on multiple fronts, including bombshell whistleblower claims.

The complaint was filed by someone who says they worked as a “tablet operator” for the early voting site at the Alafaya Public Library Branch. This complaint includes serious accusations related to voters surrendering vote by mail ballots so they can vote early in person instead. This employee alleges that the Clerk and Assistant Clerk on site instructed tablet operators not to write “cancel” on the surrendered ballots. That caused the tablet operator to fear the ballots could later be used to fraudulently vote.


The complaint, from a Winter Park resident, describes how a voter may return the vote by mail ballot in order to vote in person and how Orange County Supervisor of Elections clerks issued different instructions than the computer prompts.

“They surrender the ballot to the tablet operator,” the elections fraud complaint says. “The computer asks us if they have a ballot to surrender. We click on ‘yes’ and then a new ballot is issued and the vote by mail ballot is invalidated by writing on it. By instructing us not to write cancel on the ballot it can potentially be used to vote with. I invalidated all of my vote by mail ballots according to the computer prompting but I was harassed by the clerk and assistant clerk to stop opening the envelopes and writing on the ballots so I was dismissed from the position in August 15, 2022 at 9:23am.”

The early vote tablet operator says she informed the Orange County Supervisor of Elections office about her concerns, and that she was contacted by a “trainer” who said “the clerks were acting to her directions and that she did not want the envelopes open or cancel written on the ballots.”

“I still believe this directive is wrong and fraudulent,” the complaint concludes.

“The Department has received voter fraud complaints,” said Mark Ard, Director of External Affairs at the Department of State, who sent West Orlando News a copy of this complaint. “Those complaints are under review.”

The Supervisor of Elections office confirmed that the staff in question, Clerk Linda Christopher and Assistant Clerk Dottie Magill, are “temp employees hired through Kelly Services, worked on the 2022 Primary Election, and are currently working on the 2022 General Election at the Alafaya Library.” They are only being paid about $15/hour. Based on the complaint, the state of Florida may want to ask both of them about their training and instructions from Cowles.

Here is a copy of the elections fraud complaint filed against Supervisor Bill Cowles: