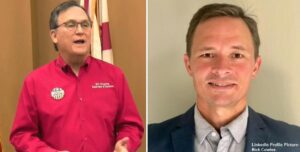 Nick Cowles, the son of Orange County Supervisor of Elections Bill Cowles, works as a “Ballot Management Product Specialist” and is a Florida Account Manager for the election equipment vendor serving his father’s office. There are growing claims of possible corruption and increasing worries about election integrity in the heart of Central Florida.

Internal complaints from the Supervisor of Elections office raised concerns about the father-son relationship and connection with Election Systems & Software (ES&S), but Cowles, a Democrat, dismissed questions about election integrity through his new $150/hour media and crisis management consultant. Considering the election equipment vendor response to our questions, Supervisor Cowles’ answer becomes even more interesting.

However, the election equipment vendor admitted to West Orlando News that Nick Cowles did indeed work directly with the Orange County Supervisor of Elections office during this election cycle. They also may be feeling some pressure, as they refused to use Nick Cowles’ name at all.

“Orange County is not his assigned territory, however, ES&S provided training to Orange County earlier this year, and due to the regularly scheduled trainer being unable to attend, the employee you referenced stepped in and provided the training,” a senior public relations manager with ES&S told West Orlando News when asked directly about Nick Cowles.

If Supervisor Bill Cowles has been “even more diligent to ensure there is a clear separation between the Orange County Elections office” and his son’s role at the equipment vendor, how did Nick Cowles end up leading the local election training this year? Why did Supervisor Cowles decide to leave those details out of his response if he is trying to be as transparent as possible regarding the situation? There was in fact no separation between Nick Cowles’ role and the Orange County Supervisor of Elections office during that official training.

When asked if Bill Cowles ever filed any ethics disclosures or disclosed anything related to his son working for the election equipment vendor, the Orange County Supervisor of Elections office provided no records. In Florida, there are many types of ethics disclosures, as may be expected by elected officials who want to avoid ethics complaints.

In the entire state of Florida, ES&S said they only have a team of nine full time employees dedicated to supporting all of their accounts here, and Nick Cowles appears to be based in Satellite Beach, Florida. Even with nine Florida employees, it was somehow Nick Cowles who led the Orange County training – keeping it all in the Cowles family.

When asked for a log of ES&S employees who accessed Orange County election equipment and for maintenance tickets through the company, the Supervisor of Elections records department claimed: “We have the maintenance tickets that the office opened with ES&S; further response to this request may be delayed due to the priority of this office’s statutory election duties.”

It has been confirmed that there were seven visits to Orange County by ES&S staff during 2022, but Supervisor Cowles will not release the names. When asked again who is authorized from ES&S to visit or inspect anything related to the Orange County Supervisor of Elections, the only response was: “The ES&S staff assignment for OC SOE maintenance ticket is ES&S responsibility.”

Another concern that was not addressed by the company is the fact that Bill Cowles has been an elected Supervisor of Elections for 26 years and has connections and influence all over the state of Florida through his position. Did Bill Cowles or Nick Cowles leverage any of these relationships or connections to gain a special benefit?

Two sections of Florida’s ethics laws may come into play for Bill Cowles as well:


“A public officer or public employee shall not abuse his or her public position in order to obtain a disproportionate benefit for himself or herself; his or her spouse, children, or employer; or for any business with which he or she contracts; in which he or she is an officer, a partner, a director, or a proprietor; or in which he or she owns an interest,” states Article II, Section 8(g) of the Florida Constitution.

In Florida, the term “public officer” includes any person elected or appointed to hold office in any agency. There is also a Florida statute regarding misuse of public position.

“No public officer, employee of an agency, or local government attorney shall corruptly use or attempt to use his or her official position or any property or resource which may be within his or her trust, or perform his or her official duties, to secure a special privilege, benefit, or exemption for himself, herself, or others,” states Sec. 112.313(6), Florida Statutes.

All elected officials are expected to prevent any possible doubt of corruption or special treatment in any way that benefits themselves or their families, especially the elected Supervisor of Elections.