Conservative Republican Mike Miller represents nothing that the Democratic Party or our officials should be supporting, let alone endorsing in this critical election year. Making Dyer’s endorsement of Miller even worse is the fact that Democrat Beth Tuura is in the race. Tuura can also make history by becoming the first openly lesbian member of the Florida House if elected. Dyer’s embrace of conservative Republican Miller is a slap in the face to the LGBT community and Dyer is effectively punching the Democratic Party in the face.

Mike Miller is part of the Republican Party in Florida blocking the expansion of Medicaid under Obamacare. Miller supported legislation to allow open carry and campus carry. He is a supporter of the NRA, while Tuura is endorsed by the Pride Fund, America’s only LGBTQ organization solely focused on gun violence prevention in the aftermath of the Pulse tragedy. Miller has supported abortion restrictions in the legislature. Miller is also an opponent of public education and pushes school choice, voting to expand charter schools and to require school districts to share their construction funds with charter schools. Miller supported legislation to prohibit local governments from banning fracking, expanding the practice in Florida and putting our environment in jeopardy. Miller had an 87% average score with the American Conservative Union.

Why would any Democrat want to send Mike Miller back to the Florida legislature?

Prior to being elected, Miller spent his political career in the Republican Party establishment, working for Bill McCollum’s Senate primary campaign in addition to serving for elected Republicans Ric Keller and Connie Mack. Miller worked as a major donor coordinator for the National Republican Senatorial Committee, meaning he spent his life fighting the Democratic Party and progressive policies across the country.

Miller’s background is one that directly contrasts with Hillary Clinton’s vision for America and Buddy Dyer’s endorsement of this conservative Republican is shameful. Dyer was recently sharing the stage with Clinton, yet days later supports a conservative Republican who dedicated his career to blocking Democratic progress. The reality is – and has been for years – that Dyer is nothing more than a Chambercrat who is more interested in maintaining the good ol’ boys network in Central Florida than promoting progressive policies and Democratic values. 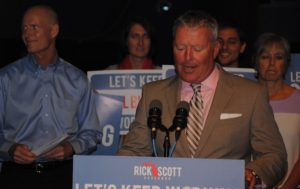 It’s also embarrassing that Hillary Clinton and the Democratic Party continue to use Buddy Dyer as a surrogate and a supposed “leader” in Central Florida. This isn’t Dyer’s first time, he also endorsed Republican leader Dean Cannon over Democrat Amy Mercado years ago and Dyer did press conferences praising Governor Rick Scott during his re-election battle.

In this close district race, Republicans are already sharing news of Dyer’s endorsement in an attempt to push down Tuura and Democratic Party efforts. Dyer knew his endorsement would become a political weapon against his own party and yet he still offered it gladly.

The silence from party leaders has not stopped the controversy from brewing within the Orange County Democratic Party membership. “Shame on Buddy Dyer,” says one post on a local Democratic Party Facebook page. “Dyer is a Republican in a Democrat disguise,” another posts. “This, with him [Dyer], is a continued story. Why does he get the platform at Hillary rallies and 48 hours later endorse Republicans?” questioned former Orange County Democratic Party Chairman Doug Head. “Our Party Chair [Juan Lopez] could (should) issue a press release, but he is in hiding.”