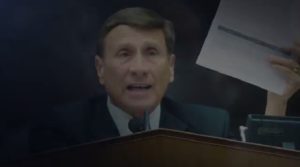 The tough ad hits Mica hard. “Just 48 hours after the [Pulse] shooting, John Mica made a promise, a blood oath, to continue business as usual and put the profits of gun makers ahead of the safety of his community,” the ad says.

“Forty-eight hours after our nation’s worst mass shooting in history, Congressman Mica showed where his true allegiance lies, standing with the NRA instead of his grieving community,” said Jason Lindsay, founder and Executive Director of Pride Fund. “While families planned funerals, and while many injured were still in the hospital, Congressman Mica accepted money from the corporate gun lobby. He took a blood oath, signaling his intent to continue prioritizing gun makers over his constituents safety. This is why we decided to roll out our first ad of the 2016 election to expose Congressman Mica’s true allegiance, and support his opponent Stephanie Murphy.”

The Pride Fund aims to provide the LGBTQ community a voice in the movement to pass sensible gun laws and prevent future gun tragedies. The organization is supporting candidates across the country who will act to reform our gun laws and improve safety in all American communities.

“People in Florida’s 7th congressional district deserve better,” added Lindsay, who is an Iraq war veteran. “We’re proud to back Stephanie Murphy, a true leader who supports sensible gun reforms like expanding background checks and preventing suspected terrorists from purchasing guns. As an educator, businesswoman, and former national security specialist, Murphy has a proven track record of serving her community, tackling tough issues, and standing up for those in need. For example, during her time at the Pentagon, Murphy earned many awards for her distinguished service, including the Secretary of Defense Medal for Exceptional Civilian Service.”

The group points out that Congressman Mica holds an “A” rating from the NRA, is a vocal supporter of Donald Trump’s candidacy and the Republican National Committee’s 2016 platform, the most anti-LGBTQ platform in modern history.

“We’re going to hold NRA puppets like John Mica accountable across the country,” Lindsay said. “We will no longer sit idly by while 33,000 Americans die every year from gun violence and politicians like Mica stand in the way of making our country safer.”