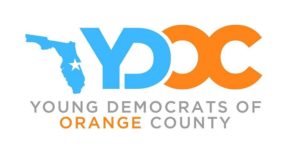 The Young Democrats of Orange County have announced their October election plan which includes four weekends of canvassing for Orange County Democratic candidates. YDOC will launch their October canvass drive this Saturday, October 1, with US House District 7 Candidate Stephanie Murphy.

“This is an election year like none-other and it is more important than ever that young voters are engaged,” said Robert Walters, President of the Young Democrats of Orange County. “We have many important races in Orange County which we are watching closely and must make sure our generation knows about them. It’s not just about the Presidency, but about ensuring when Hillary Clinton is elected, that she has Senators like Patrick Murphy and Members of Congress like Stephanie Murphy to ensure her progressive agenda is carried passed.”

The next three weekends will include canvasses for Carlos Smith for HD 49, Beth Tuura for HD 47, Linda Stewart for SD 13, Amy Mercado for HD 48, and Vic Torres for SD 15. Buddy Dyer is under increasing pressure from his own Democratic Party for once again endorsing a conservative Republican, this time choosing Mike Miller over Beth Tuura. The Young Democrats instead are jumping into action and will attempt to counter some of the damage done by Dyer and to actually elect Democrats.

The Young Democrats of Orange County have been partnering closely with the Hillary Clinton presidential campaign and the Florida Democratic Party to engage young voters, though the organization understands there is still much work to be done in the last month before election day. YDOC feels like they can make a strong and positive impact on this election cycle to get the right candidates elected and make sure that bad Charter and Constitutional Amendments are defeated. If only Democratic elected officials like Buddy Dyer felt the same way.