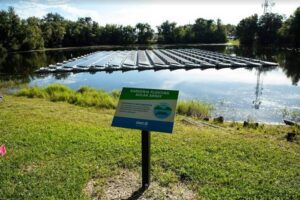 OUC – The Reliable One and the City of Orlando announced the 2030 Solar Pledge. Participating commercial customers, including the City of St. Cloud, Correct Craft, Orange County Government, Orlando City Soccer Club, Orlando Pride and UCF Downtown, are pledging to be powered by 100% solar energy at their facilities by 2030.


The pledge also requires businesses use at least 10% of solar energy upon signing, with the ability to increase their renewable energy commitment incrementally until 2030. The initial solar investment is provided through OUCommunity Solar, which gives both OUC’s commercial and residential customers access to sustainable, maintenance-free solar without the installation and cost associated with adding panels on their businesses or homes.

It’s an investment OUC began with the one of the first community solar farms in the country 2013. Earlier this year, OUC announced it was doubling its solar capacity. Today, the utility is poised to offer 272 megawatts of solar energy, enough to power 50,000 homes, by 2023.

“The City of Orlando and OUC are long-time partners in sustainability and renewable energy, and today is another step toward OUC’s goal of achieving net zero carbon dioxide emissions by 2050 – and a greener future for Central Florida,” said Clint Bullock, OUC’s General Manager & CEO. “The solar pledge guides commercial customers for future renewable investments, and we’re looking forward to working with all of our partners, like the City of St. Cloud, Correct Craft, Orange County Government, Orlando City Soccer Club, Orlando Pride and UCF Downtown, as they embrace solar energy.”

As the first OUCommunity Solar business subscriber in 2018, the City of Orlando is increasing its solar energy use as part of its commitment to sustainability and renewable energies.

“The City of Orlando is committed to 100% renewably sourced energy for all city departments by 2030,” said Mayor Buddy Dyer. “As a leader in the 2030 Solar Pledge, we are expanding our community solar use to 33 new city facilities, including community centers and city parks, in addition to Orlando City Hall, Orlando Police Department Headquarters, and 15 fire stations, which have run on solar energy for nearly four years. Becoming a more sustainable city and region is a critical undertaking, and we can’t do it alone. We commend those who join us in taking the pledge to use community solar and encourage all businesses and residents to consider joining us in the transition to 100% clean energy future.”

For eligibility requirements and to sign the 2030 Solar Pledge, visit OUC.com/2030Pledge.