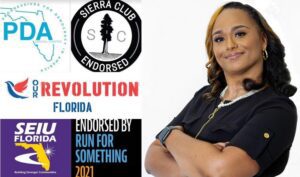 As Orlando voters get ready to vote on November 2nd, the race continues to heat up in City Commission District 5. Challenger candidate Shan Rose has picked up some big endorsements against incumbent City Commissioner Regina Hill.

Run for Something, SEIU Florida, Sierra Club Central Florida Group, Progressives For Democracy in America Central Florida Chapter, and Our Revolution Florida have thrown their support behind candidate Shan Rose for Orlando City Commissioner, District 5. Rose also earned the endorsement of former Commissioner Mable Butler. “Shan has a servant heart and her commitment to bettering the community is a reminder of young Mable. She understands the problems, the community, the issues, and has been working for years to bring positive sustainable change,” said Commissioner Butler.


“This is a grassroots campaign and the grassroots organizations see the great change I will bring to the City of Orlando District 5 as the next City Commissioner, have endorsed my candidacy and I am grateful,” candidate Shan Rose said.

Commissioner Hill was first elected by coming from behind in 2014 to win in a runoff and then easily coasted to re-election four years ago. But Commissioner Hill only captured a total of 1,146 votes four years ago. Because Orlando voter turnout is horrendous in municipal elections, a grassroots campaign could lead to a Rose upset victory. It is also very rare for major groups to endorse against City of Orlando incumbents. The city under Mayor Buddy Dyer operates like a bad high school clique when it comes to political donations and support in local elections. Rose was able to qualify by petition, proving she is running an aggressive grassroots effort.

“The Young Democrats of Orange County Board and Members are proud to endorse one of YDOC’s own members, Shaniqua “Shan” Rose, for Orlando City Commission District 5! Raising her young son in Parramore, @planwithshan1 is deeply invested in the future of West Orlando. An energetic non-profit founder, Shan’s enthusiasm and care for the community can be seen through the multitude of projects that she has taken on or partnered in. With that same energy, Shan Rose has been campaigning and connecting with the community for months, and as a result, has seen her profile and support rapidly grow as of late. We endorse Shan Rose not only due to this active interest in her community, but because it is supported by years of experience working within Orlando City Government. An arena of numerous challenges, many of which have not been addressed by the incumbent commissioner, District 5 needs a champion armed with an expert’s knowledge of the issues and the resolve to address them. We see those traits when we see Shan Rose,” the Democratic group said.

“I am so honored to have the endorsement and support of the Young Democrats of Orange County,” Rose added. “Let’s take this seat and get some young blood to bring the change we need in District 5 and to the City of Orlando.”

Rose has proposed a positive agenda for the district, which has been plagued by Mayor Dyer’s gentrification efforts and revitalization that left the Parramore community behind. The motto for the Shan Rose campaign is “A Time for Change Now.”

Rose also has the support of Derrick Wallace, founder and chairman of Construct Two Group. “For the last 30 years, I have made a commitment to lifting the Orlando community, and a dedication to economic progress and success. I support Shan Rose because she is a young visionary, full of fire and action. She will bring the District 5 community together in these challenging times,” Wallace said.

These endorsements signal there is growing support for change in Orlando’s District 5. Now, it’s time for the voters to weigh in. A few hundred votes will likely decide this Orlando election for City Commissioner.