Lawanna Gelzer Picks Up More Support Ahead of Election Day 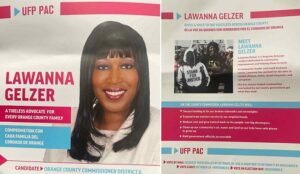 Lawanna Gelzer, who is running for District 6 Orange County Commissioner, is solidifying support throughout the community ahead of Election Day, with United for Progress saying Gelzer “gives a voice to the voiceless across Orange County.”

The group’s message is clear on why Gelzer is the best choice to be Orange County’s next Commissioner for District 6. “She has always helped communities overlooked by our county government get what they need,” UFP said.

“Lawanna Gelzer is a longtime Orlando resident dedicated to community improvement and helping those in need,” the UFP PAC political literature says. “A community leader and small business owner, Lawanna has worked for decades to combat disease, crime, racial inequality and corruption.”


United for Progress says their organization “recruits and endorses candidates, informs voters about issues and elections, up and down the ballot and increases voter turnout. By supporting candidates to win public office, UFP is moving forward on its primary goal of building community-based political power and influence in the growing Puerto Rican and Latino constituencies in Florida.”

Local Orlando activists and organizers Marcos Vilar, Nancy Rosado and Diana Perez Curry are listed as the Board of Directors.

Gelzer is a longtime community activist with deep ties across Orange County. She has put in years of hard work and organizing, which is resulting in the community rallying to her campaign. Gelzer received the most votes in August, but is in a runoff against Michael “Mike” Scott on November 8th.