Val Demings Calls Out Democrats on Defund the Police, Crime 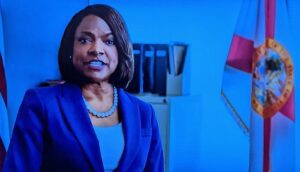 In a campaign ad airing just days before Election Day, U.S. Senate candidate Val Demings is calling out her fellow Democrats for pushing “defund the police” and for being soft on crime. As Demings attempts to appeal to more Florida voters and emphasize her law enforcement background, it could be interesting to see how the Democratic and far-left base will react.

“I stood up to those in my party who wanted to defund the police,” Demings says in the campaign ad. “I was one of a few Democrats who voted to make sure violent criminals go to jail and stay there.”


As Demings takes on her fellow Democrats, a graphic scrolled on the screen saying “Demings opposes defunding the police.” It also popped up that Demings was only 1 of 24 democrats to vote yes on Kate’s law.

She doubled down throughout the entire pitch. “I learned as a police officer you stand up for what’s right, no matter what,” Demings said. “That’s how you put the bad guys away, and keep Florida safe. In Congress, I did the same.”

Demings is challenging Republican Senator Marco Rubio and has tried to appeal to Democrats by saying her race could determine control of the Senate. Rubio has called Orlando Rep. Demings a “Pelosi Puppet” for her votes in Congress.