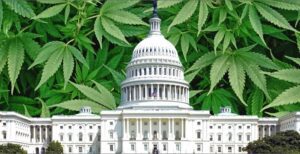 Less than six months ago, the U.S. House of Representatives advanced the Marijuana Opportunity, Reinvestment, and Expungement (MORE) Act to repeal the federal prohibition and criminalization of marijuana for the first time ever. The final historic tally was a bipartisan vote of 228-164.


However, under the Republican leadership of then-Senate Majority Leader Mitch McConnell, the Senate did not consider the legislation prior to the close of the 116th congressional session.

But the new session of Congress has been seated. The Senate underwent a partisan power shift, and McConnell is no longer in charge. New Democratic Senate Majority Leader Chuck Schumer has publicly announced his own intentions to work with Senators Ron Wyden and Cory Booker to introduce and move their own legislation to repeal marijuana prohibition.

On top of that, Chairman of the House Judiciary Committee Jerry Nadler, along with Cannabis Caucus co-Chairs Earl Blumenauer and Barbara Lee, have reintroduced The MORE Act. The Democratic Party has campaigned on this issue and recruited a lot of new voters by supporting marijuana legalization.

Now, with the numbers in Congress, will Democrats take action and push legislation through?