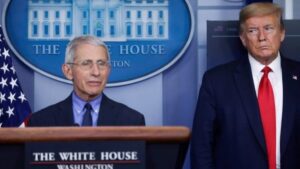 As pressure continues to build after the release of Dr. Anthony Fauci’s emails related to COVID-19, former President Donald Trump is joining in. “Dr. Fauci likes to say that he is ‘science,’ when in fact he is merely science fiction,” Trump said in a new statement. “We were right about the China Virus from the beginning, and now the entire world sees it,” the former president added while also calling on the Chinese Communist Party to pay $10 trillion in global reparations.


In his own defense, Dr. Fauci said “attacks on me quite frankly are attacks on science.” President Joe Biden continues to fully support Dr. Fauci and Democrats have shrugged off the emails. Republicans are calling for Dr. Fauci to resign. It seems like he is safe and will be staying as the pandemic continues. Meanwhile, Trump continued to question how bad things could have been if the country followed Dr. Fauci’s early advice in the pandemic. He also continued to question the Wuhan lab suspected of being the origin of COVID-19.

“Even here in the United States, the so-called experts like Dr. Fauci were wrong about the Wuhan Lab and China’s role the entire time,” Trump said. “Just think how bad things would have gotten if I followed Dr. Fauci’s advice and never closed down travel from China (and other things)?”

Regarding the Wuhan lab and the World Health Organization, Trump continued to call for a full and transparent investigation.

“It is now unanimous, and I have been proven right (once again) that the initial World Health Organization Report on the Wuhan Lab was flawed and must be redone, this time by a truly transparent investigation. We were right about the China Virus from the beginning, and now the entire world sees it. This is why the Chinese Communist Party should pay $10 Trillion in global reparations for what they allowed to happen, the worst event in world history.”