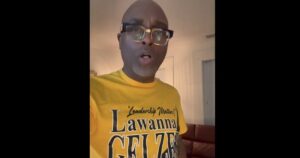 
Boone reported with WFTV News in the Central Florida market. His knowledge of local government, politics and issues is clear, and he obviously felt it necessary to weigh in on this Orange County Commissioner race. Gelzer received the most votes in the August election, but is in a runoff against Michael Scott after Supervisor of Elections Bill Cowles changed the vote results.

Boone’s endorsement of Gelzer did not end there.

“I’m encouraging you, and all of your friends, go to the polls – don’t walk, run to the polls – and vote for Lawanna Gelzer to be your next Orange County Commissioner from District 6. She’s for the people.”