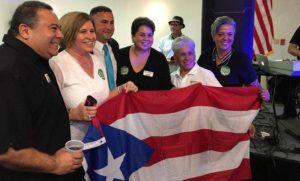 After his decisive victory in a hotly contested primary, Darren Soto is now closer to making history, becoming Florida’s first Puerto Rican in Congress. Currently, all other Latinos in the U.S. House and Senate from Florida are of Cuban descent.

“I’m also so proud, con mucho orgullo, that we are continuing on a historic run, one that represents the culmination of over a million Puerto Riqueños and millions of Hispanics here in Central Florida and beyond to be the first Puerto Rican elected from Florida and first Hispanic elected from central Florida,” Soto said at his victory party.

As a state senator, Soto was running on a proven record of delivering for his constituents, who knew him well. He defeated three other candidates in Florida’s 9th Congressional District, which is a Democratic-leaning seat, meaning Soto will likely make history and win in November. He will face Republican Wayne Liebnitzky in the general election.

Soto received a total of 14,105 votes in parts of Orange, Osceola and Polk counties, or 36% of the total vote. Dena Grayson and Susannah Randolph both received 28% and Valleri Crabtree got 8% of the vote.

Randolph, who is married to Orange County Tax Collector Scott Randolph, ran a negative and personal campaign against Soto. She spent hundreds of thousands of dollars and received many organizational endorsements, but that failed to translate into voter support. Randolph was engulfed in scandal towards the end of the primary when a former female employee and friend of hers warned voters that “Susannah Randolph is no friend of women.” Holly Fussell claims Randolph ignored pleas for help when Fussell faced sexual harassment which eventually led to rape, according to the victim.

“I am so proud of our next Congressman for District 9, State Senator Darren Soto,” Democratic Hispanic Caucus of Florida President Vivian Rodriguez posted. “He has worked hard for this moment and has made history in becoming the first Puerto Rican to win his primary election as a Democrat! The Democratic Hispanic Caucus of Florida has proven that with hard work and determination we could contribute to the successful win of a Latino candidate and we will continue to target the Latino GOTV to help elect candidates that care about our community. Si Se Puede!!”