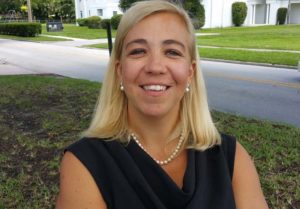 
Democratic congressional candidate Susannah Randolph is facing pressure from a former female employee who has now decided her ex-boss is “no friend to women.” The former employee is warning Central Florida voters about Randolph, urging them to consider her story before voting in Florida’s 9th congressional district.

“Today is the first day of early voting in Florida, and I’ve decided to make an unusual recommendation,” Holly Fussell, a former personal friend and employee of Randolph, posted publicly on social media. “I was both a friend and employee of Susannah Randolph. I trusted her as my mentor, and as a local feminist leader in our community. But when I came to her for advice when I was being sexually harassed, she encouraged me to brush it off and implied I was overreacting, and that it was somehow okay for a man to sexually harass me and threaten me because he was drunk.”

This is a stark contrast to the image Randolph has been attempting to portray in her campaign, but it is far from the first criticism of Randolph’s dirty politics. Randolph has aggressively targeted women voters in her race, even lying about her opponents and misrepresenting their positions to gain more female support. Earlier this month, “Women for Darren Soto” held a press conference slamming Randolph for her false mailer against her primary opponent. “I am disgusted that my initiative, that is so close to the heart has been used as fodder for a political smear campaign,” founder of the 43 Days Initiative and survivor of sexual assault Danielle Sullivan said as she called for an apology from Randolph. Randolph’s mailer was called “completely untrue, and bold faced lie.”

Today, Fussell continued the narrative against Randolph. Fussell’s personal story raises alarming flags about Randolph, her attitude and her true colors when it comes to women and politics.

“She [Susannah Randolph] even witnessed him threaten me, and tell me I was ‘done in politics’ if I continued to refuse his advances, yet she continued to defend and support him — once again claiming he was just drunk and I should forgive and forget,” Fussell continued. “Later, he became violent.”

That’s right, Randolph – a self-proclaimed champion of women’s rights and women’s issues – allegedly ignored her own personal friend and former employee in her time of need. Randolph preferred to defend a man committing unwanted sexual advances, harassment and even violence against women.

“Although I am no longer in this dangerous situation, I remain deeply disturbed that Susannah continues to present herself as a bold progressive and feminist,” Fussell said. “It is my belief that, if elected, more female employees could be ‘mentored’ in the same way that I was, and put in danger. I strongly encourage each of you to consider my story before voting in Florida’s ninth congressional district.”

“Susannah Randolph is no friend to women,” Fussell concluded.

Randolph is facing off against Sen. Soto, Valleri Crabtree and Dena Grayson on August 30th.

Holly Fussell has provided more details, including accusations of rape against the same man who previously sexually harassed her. Fussell’s updated post in its entirety:

During my time working with Susannah Randolph, candidate for Congress in FL-09, she told me that my many complaints of sexual harassment weren’t valid — that they should be excused because the man had been drinking. After witnessing this same man threaten my career because I refused his advances, Susannah promoted him, and once again, encouraged me to forgive and forget because he had been drinking.

I recognize now that I should have told someone else I worked with — but at that time, Susannah was the most senior female staffer, and she had also been my longtime friend and mentor. I trusted her judgment. I convinced myself that she was just looking out for my best interests. But she wasn’t. When this same man suggested that I increase our online fundraising numbers by sending a picture of my breasts to our email list, Susannah laughed right along with him.

After over a year of sexually harassing me without consequence, he raped me. I didn’t have the courage to report it at the time. I was terrified it would ruin my career, and doubted I would get any kind of justice anyway. I struggled to accept that this horrible thing had happened to me, and felt that I had nobody to go to who could give me advice, since the one woman I had always gone to for career advice had ignored my complaints.

I don’t blame Susannah for my sexual assault — not in the slightest. That is the sole fault of the rapist himself. But I remain deeply disturbed that she ignored my very serious complaints for so long, and that she would promote a man she had witnessed sexually harass me. Perhaps even worse, although she knows I accused this man of rape, she continues to maintain a relationship with him (he was fired when I eventually told another supervisor about the situation, so I no longer have to work with him). You can find him on her campaign’s current FEC report over a dozen times.

It took me a long time to work up the courage to tell this story. I hoped that my post earlier this week, which didn’t include the graphic details, would be enough. But since posting that, I have received a number of complaints, mostly from progressive female activists, disgustingly enough, denying that these awful things happened to me, complaining of the timing of my post, and criticizing me for using Facebook to share my concerns.

But you know what? I tried to use different mediums, many different times over the past few years, and none of them have worked. I tried for so long to work this issue out privately. But that is no longer an option. I cannot sit by silently and watch Susannah Randolph be placed in a position of power, where she can continue to deny her employees’ accusations of sexual harassment, especially considering her continued relationship with my rapist. I can’t have that on my conscience.

I am not working for any of the candidates running against her, nor have I worked for any of their campaigns. Sharing my story has already cost me many of the people I believed were my friends, as well as my relationships with several progressive organizations that I’ve worked so hard to build. For the rest of my life now, when I apply for a job, people will know that I have complained of sexual harassment, and while that shouldn’t make me less employable, realistically, we all know it will hurt my future career prospects. But if I can stop her from doing this again, if I can stop this from happening to another girl, it will have all been worth it.

I’m not encouraging you to vote for anyone in particular. I’m simply encouraging to consider my story before you vote for Susannah.