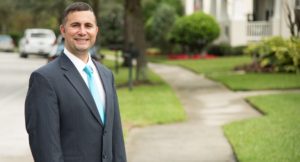 There are big shoes to fill in Florida’s 9th Congressional District, which includes all of Osceola County as well as parts of Polk County and south central Orange County, and voters deserve the best possible replacement for Alan Grayson, who is currently running for US Senate. Democratic voters have four options in the August 30th primary; however, only Darren Soto has distinguished himself from the field as the right candidate to send to Congress.

State Senator Darren Soto is not only the best qualified candidate running, he is campaigning on a proven track record of delivering for constituents. He has represented a majority of the district in the state legislature for a decade. On top of that, he has put forward a progressive agenda that Democratic voters in this district both expect and need from their member of Congress.

“I have the most legislative experience and knowledge of our community,” Soto said in his West Orlando News candidate questionnaire. “I have also gotten the job done over my nearly 10 years representing the majority of District 9 in the Florida Legislature bringing back millions in projects such as the Advance Sensors Manufacturing Center, New Poinciana Valencia College, SunRail and Northern Everglades Restoration. In addition, I have passed landmark bills providing benefits to families of fallen firefighters, admitting DREAMers to the Florida Bar, and protecting families in foreclosure as well as leading the charge to stop fracking in Florida.”

Soto has made it clear he will be a progressive member of Congress, as his top priorities in Congress will be focused on employment, immigration reform and ensuring access to high quality affordable healthcare. Soto wants to require universal background checks, regardless of the type of firearm sale. He also stated he supports the “Denying Firearms and Explosives to Dangerous Terrorists Act.” He also supports raising the minimum wage to $15 per hour immediately.

On immigration, Soto is ready to fight for comprehensive reform and would work to stop deportations of DREAMers.”We must pass comprehensive immigration reform with a pathway to citizenship,” Soto said. “If we are unable to pass a comprehensive plan, we must at least codify President Obama’s DAPA and DACA programs through legislation, remove the arbitrary immigration quotas on highly skilled students attending our universities, and reform the agriculture guest worker program to make it more workable.”

On many top national issues, Soto has aligned himself with the positions taken by Hillary Clinton and the national Democratic Party. On national security, Soto would support Clinton’s call for a no-fly zone in Syria, however he made it clear he “will remain vigilant” in assessing foreign policy decisions while in Congress to determine if they remain appropriate. He also says the U.S. should not be policing these war zones on our own.

“I support our Democratic nominee Hillary Clinton’s business tax plan which cracks down on corporate inversions, requires an exit tax for domestic companies moving abroad and foreign corporate profits schemes,” Soto answered when asked about the economy. “I also support scrapping the cap on Social Security withholdings to assure its long-term viability.” Soto also stated he will fight to expand Medicaid in Florida.

Acknowledging climate change, he believes the Paris agreement is a “step in the right direction” but notes the contract is non-binding. “The U.S. must take a more aggressive role in leading the charge to reduce carbon emissions through developing innovative technologies and conservation and then sharing them with the world,” he said.

Soto is facing off against formidable Democratic opponents in the August 30th primary. Valleri Crabtree has proven herself to be a grassroots champion, capable for elected office and ready to serve her community. She is an important leader in the Democratic Party but in this race, she is simply outmatched by Soto. Dena Grayson, who began this race as Dena Minning, has been absent from the district and the public eye. Unlike her husband, she is very quiet and apparently likes to be way under the radar. But her new last name aside, she is not the right candidate for the 9th district. Finally, Susannah Randolph, who has recently come under fire from yet another former friend and employee, would be a self-aggrandizing member of Congress who puts herself first. While Randolph would be progressive, voters do not need, nor deserve everything else that comes with her and her surrounding drama.

“The most important issues my district faces are largely the same as the issues our country faces,” Soto said. “We face unemployment and a lack of high paying jobs. We also have a large number of senior citizens and under-served populations that need greater access to healthcare so ensuring the solvency of Medicare and Medicaid and protecting the Affordable Care Act would be a priority for me in Congress. Finally, we are continuously facing a problem with access to affordable higher education. If elected, I would work to lessen the mounting debt that students face from student loans by allowing federal student loans to be refinanced at lower interest rates and expanding federal loan forgiveness programs for students who choose public service careers.”