Aramis Ayala made history being elected the first African-American female state attorney, pulling off a huge upset against incumbent Jeff Ashton. The new Orange-Osceola County state attorney previously served her community as both a defender and a prosecutor, offering a much-needed perspective from both sides of the court. Ayala called the victory “humbling” and “exciting.”

During the campaign, Ayala pledged to re-establish a centralized intake division, something Ashton disbanded, and she promised to bring back the Domestic Violence Unit, something Ashton also eliminated as a stand-alone unit. She also campaigned on delivering equal and fair justice while promoting the highest ethical standards.

Noticeably absent from the campaign trail and public eye himself despite the increasingly high-profile race, arrogant Ashton believed his “celebrity” and name recognition would carry him. When Ashton was first elected, it came just after the high-profile Casey Anthony trial. It’s interesting to note his big election loss comes just after Ashton pushed the controversial Noel Carter case on behalf of Mayor Buddy Dyer and the Orlando Police Department.

A Washington, D.C.-based political action committee, backed by George Soros, spent $1 million supporting Ayala’s bid. The campaign ads highlighted the unequal justice and racially disparate policies from Ashton’s office. After the results, the incumbent spoke out directly about the money spent against him and blamed voters for his loss.

“The voters decided today that the price of the State Attorney’s seat is $1.4 million in lies,” Ashton said in a statement. “I’m deeply disappointed in this result but I stand by the good work of my office and the folks who work there.” 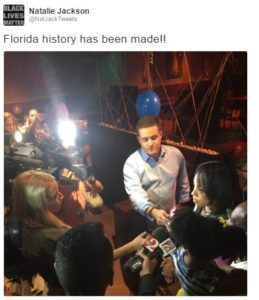 Supporters of Ayala are focusing on the history and positive focus of the winner’s campaign. “Florida history has been made,” civil rights attorney Natalie Jackson tweeted. Shaquille O’Neal even tweeted a GOTV message for Ayala. Many other messages across social media flooded in celebrating the upset victory. Orange County Property Appraiser Rick Singh also joined the Ayala celebration.

“These election results are a direct statement from voters that we will not accept the status quo and we are uniting together to bring change and equal justice to Central Florida,” said community leader Lawanna Gelzer, who supported and campaigned for Ayala. “The wrongs of this office can be repaired by the right person, and the community has spoken – it’s Aramis Ayala.”

“Equal justice, that is all we have been asking for in Central Florida,” Gelzer added.

“It’s the voters who spoke,” Ayala said. “What won the election was the voters, the voters made the decision.” She celebrated the victory with her husband and her daughters.