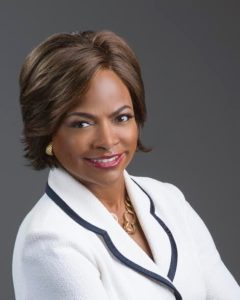 After redistricting, Central Florida’s 10th Congressional District lost its Republican incumbent and is now set up to become a Democratic stronghold. The open seat has four Democrats seeking the nomination, but Chief Val Demings has proven herself to be the strongest candidate in the race and the only one ready to lead in Washington, on day one.

Chief Demings has put together her best campaign effort yet, with support from the national party, various organizations and local supporters eager to send her to DC. Demings is running on her long 27-year career in law enforcement, including her role as the first African-American female chief of the Orlando Police Department, as well as a strong Democratic platform, putting the key interests of her district first. She has touted her experience dealing with tough budget times, but still getting the job done – something very similar to what members of Congress will face next year.

When asked what distinguishes her from the other candidates, Chief Demings provides one answer: “Leadership.”

“As Orlando’s Police Chief I had to reform the way our department worked and that took leadership,” Chief Demings said in her West Orlando News candidate questionnaire. “By doing so, we got results – in fact, we reduced violent crime by 40% by working with the community. We are living in critical times. We need leaders who are battle­ tested and people ­focused. My 27­-year career at the Orlando Police Department shows my commitment to this community and my proven leadership.”

Chief Demings has made it clear her top priorities if elected to Congress will be gun violence prevention, increasing graduation rates and access to college or job training programs, and protecting Social Security and Medicare.

She is ready to use her law enforcement background to become a national leader on gun safety and preventing violence like what Orlando witnessed in the Pulse shooting. “An individual who is too dangerous to fly, is too dangerous to buy a gun,” Demings said. “We need universal background checks and we need to reinstate the ban on assault weapons.” She also supports the “Denying Firearms and Explosives to Dangerous Terrorists Act.”

She calls income inequality a “huge issue” facing the community and says it is “troubling to watch as the wage gap continues to grow.” Chief Demings is ready to fight for better wages in Central Florida and around the country. “I will support a $15/hour to the federal minimum wage,” Demings pledged. “I grew up with two parents who worked and struggled every day of the week just to put food on the table. I know the struggle working families go through because I’ve lived it.”

She also believes the U.S. tax code needs to be written so that everyone pays their fair share. “I would support ending corporate tax inversions which would raise an estimated $41 billion in revenue,” Demings notes. “Billion dollar corporations, who reap enormous benefits from the American taxpayer shouldn’t be able to hide their profits in offshore accounts through paper companies that exist in name only.”

Chief Demings supports President Obama’s executive actions for “Dreamers” and their families and pledged to work to expand them, including putting them on a path to citizenship. “Immigration was the fuel that built this nation,” she said. “Congress must stop viewing immigration policy as something that can be left to rot for twenty years and then patched up with a one­-time ‘fix.’ Instead, many aspects of immigration policy, such as immigration quota and worker visa rules, will have to be adjusted every few years to reflect the changing needs of our businesses and our citizenry.”

Her law enforcement experience also best prepares her to make the level-headed and serious decisions on foreign policy matters, while being conscious of the long-term impact and consequences. “In Congress I will listen to and work with national security experts to take the most prudent actions possible,” Demings notes. “The United States needs to do all we can to ameliorate the [Syria] conflict, but be conscious to not further destabilizing the situation.”

“We need to attack ISIS’s lifelines, the most important being their access to the internet and funding,” she added. “Here at home, it’s all about being hyper ­aware of what is going on in our community. We all have an obligation to report suspicious behavior, whether it’s our neighbor, co­worker, family member or friend, if you see something, say something.”

The fact that the national Democratic Party and other leading organizations have lined up behind Demings means she will be able to deliver real results for her district. Normally, freshman members of Congress do not have the connections, investment and national support behind them – this is something Demings can leverage and use effectively for her constituents.

Demings is facing off against three other formidable Democratic opponents. However, it is likely the winner of the primary will be elected to Congress in November, as the district leans Democratic. State Senator Geraldine Thompson does carry years of legislative experience, but she has not been able to make the necessary splash at the congressional level to take her campaign to the next level. Progressive Fatima Rita Fahmy is offering voters another option and will likely remain on the political scene for years to come. She should continue to be a force in local Democratic politics and keep pushing the party. Former Florida Democratic Party Chair Bob Poe is definitely spending a lot of his own money, but he did not respond to the candidate questionnaire like his opponents and is not the right candidate for this district.