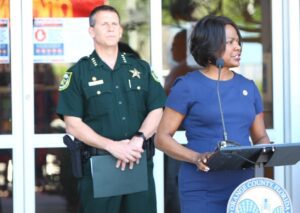 This week, in the chaos of the national outrage over George Floyd’s murder, Representative Val Demings asked fellow police officers “What in the hell are you doing?” Her amplified message on the national stage comes as she is actively positioning to be Joe Biden’s Vice President. But Val Demings also did something else this week: she endorsed controversial Orange County Sheriff John Mina for re-election, despite the fact Mina led an Orlando Police Department plagued by excessive force and police brutality. He has also failed to reduce violent crime and murder since serving as County Sheriff, and gang activity along with youth problems are rampant.

What in the hell are you thinking, Representative? I ask that as someone who is friends with Val Demings personally, and someone who has endorsed her publicly for Congress. In fact, prior to publishing this, I was writing a “Val for Veep” article debating her merits on the national stage.

But now there is no way Democratic nominee Joe Biden should select Val Demings moving forward. Donald Trump and his campaign allies would have a field day destroying the Democratic message on this issue, likely leading to reduced turnout. If the Democratic Party thinks that they can simply position Val Demings as a former Orlando police chief and win the issue, without discussing the hypocrisy of her supposed political support for troubled Sheriff Mina and the violent reality of the Orlando Police Department, then they are in for a rude awakening. Here’s a very small recap of Orlando police brutality and excessive force news during Mina’s leadership.

In an odd political twist, when I pressed Mina’s OPD on the excessive force settlements being made at the time, his department actually tried to blame Democrat Val Demings. They said most of the cases they were making very large payments to settle happened during Demings’ leadership, and that he shared no blame because of that. Mina was also a lifelong Republican until he ran for Orange County Sheriff. Since Val Demings is endorsing Mina right now, it appears she agrees with his previous assessment.

That alone disqualifies her as the potential Democratic Party Vice Presidential nominee.


But apparently Val Demings has no problem with John Mina’s history leading a department full of excessive force and police brutality claims either. “John’s 28 years in law enforcement have equipped him with the experience necessary to continue to run an effective and efficient Sheriff’s Office, where citizens are treated with dignity and respect,” said Val Demings’ endorsement. There are currently four other Democrats running for Sheriff.

The other major problem for Val Demings is she does not like to discuss that aspect of the Orlando Police Department. The Atlantic spotlighted the long record of excessive force complaints against Orlando police when she ran for Congress, and Demings declined comment. She referred questions to the Democratic Congressional Campaign Committee, who also declined to comment. This will not work against the Donald Trump campaign, and it will not be sufficient for the American people either.

Demings’ rising star status surely will not fully fade because of her shocking local endorsement in the middle of these volatile times in national politics. But it could, and very well should, end her bid for VP this time. I also ask again, what in the hell are you doing?