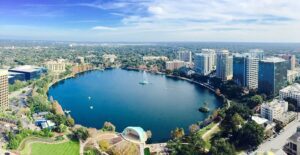 Orlando Mayor Buddy Dyer has long touted his plan for a successful resurgence of downtown would rely on luring the youth back to the city core. His problems with this objective started long before the coronavirus crisis, but one can only imagine the current situation will only make Orlando’s situation worse. And one new study is putting numbers behind Dyer’s failure.

Orlando is one of the worst places for graduates to find a job, according to stats from ApartmentList.com. Orlando ranked 46th out of the top 50 metro areas. It reconfirms other studies that show Orlando ranks consistently as a city with the lowest wages in the nation while Dyer has served as mayor.

On top of that, rent is skyrocketing in Orlando, especially downtown. The data shows that college graduates lose up to one-third of their income paying rent in Orlando. That’s unsustainable for Dyer’s targeted downtown demographic. Rising rents have been a hallmark of the Dyer administration’s push to build the urban core, despite lack of proper demand in addition to his openness to investors buying up property and renters paying the ultimate price.

Now, throw in COVID-19 to the mix and what is Dyer’s downtown plan going to be?