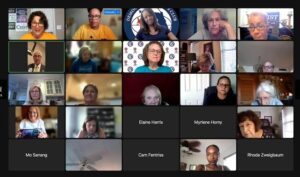 With the of support from nearly 75 volunteers and grassroots supporters, the Crist campaign made calls to thousands of voters who are outraged by Republican Governor Ron DeSantis’ position on abortion. The phone bank urged them to make their voices heard at the polls ahead of the November elections, warning an abortion ban could be in Florida’s future.


“Our state cannot afford another 4 years of Ron DeSantis’s attacks on women and their freedoms,” said Crist. “We have 9 days left to fight like hell to send a message to DeSantis – we are done with his anti-woman, anti-freedom agenda!”

Recently, Crist held a press conference slamming DeSantis for his abortion ban that includes no exceptions for victims of rape or incest, saying the impacts will be felt by young girls and women throughout the state and claiming they will grow up having less rights than their mothers did.

Crist has made abortion a priority on the campaign trail, and even after the debate he tried to focus the race on the issue. “One hour was apparently not enough time for Ron DeSantis to answer some simple questions, like whether he will stay in the job for four years and whether he will ban abortion outright,” Crist said at the time.