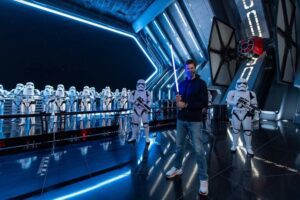 
According to Disney, Tom Brady has starred in the iconic “I’m Going to Disney World!” commercial more times than any other NFL player. Brady ended up visiting Disney over the Easter weekend with family and friends, and he spent some time in Star Wars: Galaxy’s Edge at Disney’s Hollywood Studios. Brady must still have the good luck to avoid the Easter holiday tourist crowds!

We guess his payment to the Dark Side for avoiding those crowds included filming this promotional video for Disney:

The seven-time Super Bowl champion Tom Brady made the promise, and kept his word again. We’ll see who gets to utter the famous words next.

Disney World Most Mentioned Destination for 2020 Travel on Twitter