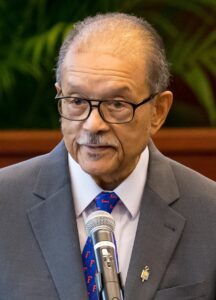 State Representative Geraldine Thompson, and members of the Gator Caucus of the Florida House of Representatives, initiated the presentation of a resolution to honor George H. Starke, Jr. who was the first African American student to attend the University of Florida when he enrolled in 1958. George H. Starke, Jr. was born in Orlando in 1931 and graduated from Orange County Public Schools before enrolling in Morehouse College in 1949. He left Morehouse when he was called into the United States Air Force during the Korean War. He later returned to Morehouse where he joined Kappa Alpha Psi Fraternity, Inc. and completed his bachelor’s degree in 1957. Dr. Martin Luther King, Jr., a Morehouse alumnus, delivered the commencement address during Starke’s graduation exercise.


In 1958, when he was admitted to the University of Florida Law School, George H. Starke, Jr. became the first African American student accepted to the University of Florida in its 105-year history. Members of the Florida Highway Patrol escorted him to class as a precaution that was later proved warranted when James Meredith, who became the first African American student admitted to the University of Mississippi, was shot by a sniper. During his classes, Starke was separated from his classmates by an empty row of seats. He learned that his name was mentioned at a meeting of the Ku Klux Klan and he was warned by university officials to not travel through the Ocala National Forest due to Klan activity.

Following many challenges, George H. Starke, Jr. withdrew from the University of Florida before completing his juris doctorate. He moved to New York where he began a career in investment banking with Wall Street firms. He returned to Orlando in 2015 and has been honored by the University of Florida by presenting him its Distinguished Alumnus Award, the honorary Doctorate of Laws and induction into the Florida Blue Key honor society. The Florida House and Senate honored George H. Starke, Jr. on April 15 for the important role he played in the desegregation of institutions of higher education in Florida. Mr. Starke, who is approaching his 90th birthday, observed the House session remotely while members of his family were recognized in the Capitol in the House Gallery.