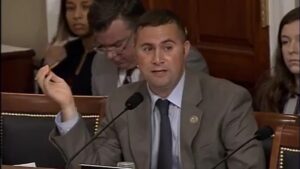 Prior to President Joe Biden’s decision, Representative Darren Soto led a group of House Democrats in sending a letter to President Biden urging him to tap into the Strategic Petroleum Reserve and ban crude oil exports to bring down high gasoline and fuel prices. The Orlando Congressman joined Rep. Ro Khanna in leading the effort.


The letter concurred with Senator Jack Reed and Senate Democrats’ letter to the President calling for action to bring down gas prices. It also expresses support for the climate smart investments in the Build Back Better agenda that will save American families an average of $500 per year on energy costs.

“We know ensuring affordable and reliable energy is a top priority for your administration,” the representatives wrote. “We must use all tools at our disposal to bring down gasoline prices in the short term. We agree with Senator Reed and our other colleagues in the Senate that have called for a ban on crude oil exports and a release from the Strategic Petroleum Reserve.”

“OPEC is manipulating gas prices by constraining supply so that it will not meet the increased demand,” the letter continued. “A ban on U.S. crude oil exports will boost domestic supply and put downward pressure on prices for American families. We also support using the additional funding for the Low–Income Home Energy Assistance Program from the American Rescue Plan to help families with heating costs this winter.”

President Biden ended up approving the release of 50 million barrels of oil from the Strategic Petroleum Reserve “to lower prices for Americans and address the mismatch between demand exiting the pandemic and supply,” the White House said. The U.S. will make 32 million barrels of oil from the Gulf Coast available “in response to the highest oil prices experienced in seven years,” the U.S. Energy Department said. The other 18 million barrels of the release “will be an acceleration into the next several months of a sale of oil that Congress had previously authorized.”

Fellow Orlando Congresswoman Val Demings also praised the decision. “I’m glad to see the administration taking this important step as we work to bring down costs for Florida families,” Rep. Demings said. “The bipartisan infrastructure plan that we passed is a long-term investment to bring down costs and strengthen our economy, but families need help now as we move into the winter.”

“Growing up the daughter as a maid and janitor, we knew that every dollar matters,” Rep. Demings added. “The price of gas has a direct impact on our ability to make ends meet. Whether caused by price manipulations or supply chain issues, it’s clear that we need to be strong and bold to attack rising prices and save Floridian families money at the pump.”