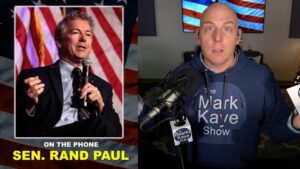 Senator Rand Paul of Kentucky called into the nationally syndicated “Mark Kaye Show” on Monday to discuss what he calls President Joe Biden’s unconstitutional vaccine mandate and his theory that the COVID-19 mandate will ultimately be killed by the Supreme Court’s Obamacare decision.


Kaye also asked Senator Paul about the Supreme Court and how he felt they would ultimately rule in the case. He said there were some “great” justices when it came to mandates, and others who were not so reliable.

“I think Gorsuch, Alito, and Thomas are good,” stated Paul. “I think it’s unknown whether Barrett and Kavanaugh will be with us. I think Roberts blows in the wind and could go either way but probably goes with the liberals on this.”

Mark Kaye is a nationally syndicated radio host, star of “The Mark Kaye Show” on Newsmax TV, and an internationally known social media streaming personality who has daily online broadcasts.