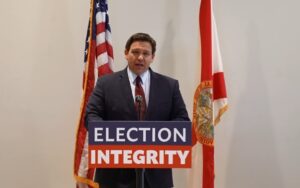 Governor Ron DeSantis announced a new legislative proposal to further strengthen Florida’s election integrity earlier this month. This proposed legislation will be addressed in the upcoming 2022 Legislative Session, which begins in January. Based on local questions about election integrity under Orlando Mayor Buddy Dyer, the initiative may make an impact on future municipal elections.


“We are excited to say that next legislative session we are proposing another package of election integrity reforms that will make Florida the number one state for elections,” said Governor Ron DeSantis. “I am excited that with this legislation, our state will be able to enforce election violations, combat voter fraud and make sure violators are held accountable. If potential violators know they will be held accountable, they will be much less likely to engage in improper conduct in the first place.”

Governor DeSantis called on the Legislature to take four additional steps to safeguard our elections:

The 2022 legislative proposal builds on election integrity legislation signed into law by Governor Ron DeSantis in May through Senate Bill 90. In 2021, Governor DeSantis worked with the Florida Legislature to strengthen voter identification, prohibit the mass mailing of ballots, ban ballot harvesting and prohibit private money (which he called Zuckerbucks) from influencing elections in our state.

Orlando Mayor Dyer has actively harvested ballots and paid for absentee ballot operations for years. Other local Orlando officials, like Commissioner Regina Hill, hired the same ballot harvesting operations to help win their elections as well. Here’s a detailed Orlando election complaint against Mayor Dyer that was ignored by officials and law enforcement. Perhaps under DeSantis’ new legislation, things may be different in the future for Dyer.

Since taking office, Governor DeSantis has made election integrity and security a top priority. Through the actions of the DeSantis administration, Florida has been widely recognized as running one of the best elections in the country in November 2020. The Florida Department of State is posting the state’s election audit results on its website for any Floridian to access HERE.