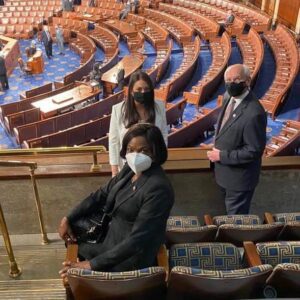 “Donald Trump took an oath to uphold the Constitution, and he violated that oath,” said Rep. Demings. “He lied about the election, told his supporters to fight, and then sat back and watched as they brutalized police officers and hunted elected officials while shouting ‘fight for Trump.’ He refused to call them off or send support to law enforcement. Seven people have died, including three law enforcement officers. He has shown no remorse.”


In her statement, Rep. Demings turned the spotlight back on Senators, including Florida’s Senators Marco Rubio and Rick Scott. Rubio is up for re-election in 2022.

“Today’s vote does not absolve the ex-president of his crimes, which were too public and too obvious to wave away. Rather, it implicates the Senate itself,” she said. “Every Senator who voted against justice has dishonored themselves and their oaths. The U.S. Senate is an honorable place, but the political ambitions of selfish men are the greatest threat to our democracy. These self-centered men are mere shadows in a sacred place where great men once stood.”

Could those harsh words against her fellow U.S. Senators indicate a potential future Demings run for Senate? Time will tell who will challenge Florida’s Republican incumbent in 2022.

“If future presidents know that they can violate their oaths and incite violence to stay in power, then they will. I pray that we will have the strength and the honor to safeguard our republic, and to rebuild an America where truth, justice, and the rule of law matter,” Rep. Demings concluded.