The Biden-Harris Administration announced that Affordable Care Act Marketplace enrollment on healthcare.gov continued to outpace previous years, with nearly 11.5 million people selecting a health plan nationwide as of December 15, 2022, which was a key milestone marking the deadline for coverage starting January 1, 2023. About 1.8 million more people signed up for health insurance. 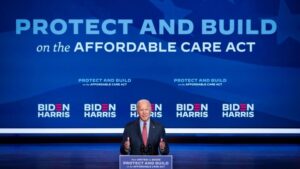 “I promised to lower costs for families and ensure that all Americans have access to quality affordable health care,” President Joe Biden said in a statement. “That’s an all-time record, with enrollment still open and not counting people who have signed up for coverage through their state marketplaces. Gains like these helped us drive down the uninsured rate to eight percent earlier this year, its lowest level in history.”

According to the administration, four out of five people who sign up for health insurance through the Affordable Care Act can find health care coverage for $10 a month or less. These lower rates were set to expire at the end of this year, but President Biden thanked the Inflation Reduction Act for extending them and saving millions of Americans on Obamacare an average of $800 a year.

“The Biden-Harris Administration has made expanding access to health insurance a key priority, and we are thrilled to see so many Americans enrolling in Affordable Care Act plans this year,” said HHS Secretary Xavier Becerra.

President Biden is also celebrating additional cost-saving measures in the Inflation Reduction Act, including seniors seeing a month’s supply of insulin capped at $35, Medicare beneficiaries paying $0 out of pocket for recommended adult vaccines covered by their Part D plan, and prescription drug companies needing to pay Medicare a rebate if they try to raise their prices faster than inflation for drugs administered at a doctor’s office.

“This year, we’re so pleased to see so many new enrollees on Healthcare.gov, taking advantage of expanded financial assistance and new eligibility to purchase affordable, comprehensive health care coverage that they can use to help keep them and their families healthy,” said CMS Administrator Chiquita Brooks-LaSure. “We look forward to a strong final month of Open Enrollment and encourage everyone who needs quality health insurance to visit HealthCare.gov and CuidadoDeSalud.gov to view plan options by January 15.”

Visit HealthCare.gov by January 15, 2023 to sign up for health care for the coming year.

“We’re not finished working to make health care a right, not a privilege,” President Biden added.