While the topics discussed were serious, frustrating and sad, the spirit in the room was full of empowerment last night as a local forum discussed racism and discrimination within the Orlando LGBT community. Oasis Fellowship Ministries, which is located on Orange Blossom Trail, hosted the community forum and partnered with the National Action Network Central Florida Chapter, the AAA Alliance and the Women of Color Leadership Coalition.

The community forum at Oasis Fellowship Ministries featured at least two Pulse survivors, both of whom continue to struggle in the aftermath of the attack and do not feel as if they have had a seat at the table up to this point. The forum resulted in a very open dialogue, making it clear people are still hurting around the city but all victims are not being included at the table or in the process. 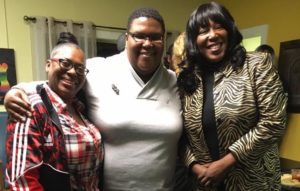 “Had a great night discussing solutions on how we can continue making strides in our communities!” posted Stacy Coley after the meeting. “Look forward to collaborating with these two leaders!” while posting a photo with Charlotte Davis and Lawanna Gelzer.

The purpose of the forum was to have an open and honest dialogue about serious concerns within the Orlando LGBT community, including racism and discrimination affecting African-Americans as well as other communities of color. The results were encouragement and empowerment to turn this town hall meeting into the beginning of a coalition moving forward. According to the forum’s sponsors, many ethnic minority LGBTQ individuals find themselves in a double minority, where they are neither fully accepted nor understood by mainly white or middle-to-upper class LGBT communities, nor are they accepted by their own ethnic group.

In fact, there was further proof of these claims when Orlando City Commissioners Patty Sheehan and Regina Hill attempted to completely dismiss the concerns of these residents. Oasis Fellowship Ministries and Pastor Brei Taylor met with Commissioners Sheehan and Hill at City Hall on March 2nd about these concerns within the LGBT community. Patty Sheehan became the most upset during the meeting and reportedly told the group essentially they did not know what they were talking about. Sheehan completely dismissed them. What kind of bubble is she living in?

Commissioner Sheehan has put herself front and center in the Pulse aftermath, so it’s not a surprise she would be easily offended and overly defensive about some of these claims – she knows it is all partly a reflection on her. She has been busy working on a plan for the one-year event, but clearly not all of the community is invited or included in the process.

It would be pretty sad if Commissioner Sheehan was attempting to promote the “Orlando United” theme so far as to discredit serious and valid concerns within the Orlando LGBT community. Hopefully there is more than showroom politics in the aftermath of the Pulse tragedy from our elected officials.

The community forum put a focus on policy and emphasized a focus on solutions for those impacted locally who are still in need. There were expressions of a need for more mental health counseling and funding as well. “This community meeting gave all involved encouragement to work together to create real change in real people’s lives,” Lawanna Gelzer, president of the NAN Central Florida Chapter, said after the meeting. “This is only the beginning of a new coalition.”

“As a member of the Black LGBT community, we are glad to see this conversation finally happening in Orlando,” added Charlotte ‘Cha Cha’ Davis. “Thank you so much to everyone for coming out and speaking up. I definitely look forward to future endeavors.”