Orlando is a resilient community. We are Orlando Strong.

The community response to the attack on Pulse, the worst mass shooting in U.S. history, has been incredible. Orlando is showing its love (#OrlandoLove) and it is showing its strength (#OrlandoStrong).

Central Florida’s tourism industry is also not likely to suffer as a result of the devastating attack on the Pulse nightclub, CNBC reports. While tourism may dip in Orlando, no huge cancellations are expected. Experts point to the 2005 London transit bombing and last year’s Paris terrorist attacks as examples of the resiliency of the tourism industry following isolated acts of violence or terrorism. 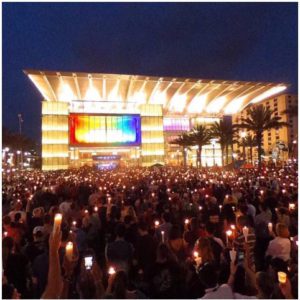 If it can be believed, David Scowsill, president and CEO of the World Travel & Tourism Council, said when city centers experience isolated acts of violence not aimed directly at tourists, “things go back to normal very quickly.”

The Orlando nightclub attack comes just one month after the city’s official tourism association said it set a record for inbound travelers last year. According to Visit Orlando, the Central Florida city received 66.1 million visitors last year, representing a 5.5 percent over the prior year. That also made it the most visited U.S. city for tourists last year.