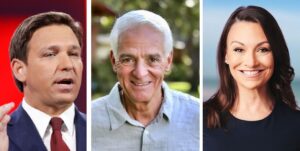 In environmental political news, VoteWater – a non-partisan, grassroots organization dedicated to combating systemic pollution, ending the mismanagement of waterways, and keeping Florida’s water clean – has endorsed Charlie Crist to be the next Governor of Florida.

“If we had more candidates like these, Florida might have cleaner water,” said Executive Director Gil Smart of VoteWater, the Stuart-based group formerly known as Bullsugar.org.


VoteWater’s endorsement follows Crist’s ongoing dedication to protect Florida’s environment and waterways, including unveiling his “Clean Water for All” plan in the first few months of his campaign for governor.

“I’m thrilled and humbled to earn the endorsement of VoteWater as we fight to protect Florida’s water and keep it clean for generations to come,” said Crist. “Access to clean water is a fundamental right and critical to Florida’s environment and our economy. As your next governor, I will fight to keep Florida’s water clean, our environment protected, and our economy strong. Unlike our current governor, I’m not afraid to stand up to the big special interests in Tallahassee.”

In June, Crist also earned the endorsement of the Florida Chapter of the Sierra Club, the oldest, largest environmental advocacy organization in the nation.

VoteWater’s endorsement comes as Crist is claiming the status as frontrunner ahead of the Democratic primary against Agriculture Commissioner Nikki Fried. His campaign says they are leading the race because they have raised over $12 million, earned endorsements from over 160 community leaders and elected officials, and earned support from educators and union workers. The Democrats both say they can defeat Republican Governor Ron DeSantis.