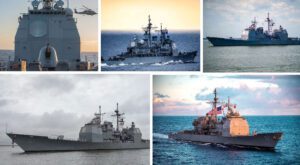 Retired Lt. Colonel Al Santos, a Republican candidate for Florida’s 7th Congressional District, slammed the Biden administration for neglecting the United States Navy and pushing to cut its size and reduce the number of big capital ships. Santos announced he supports the construction of a 500 ship Navy by 2040, including new capital ships as well as replacement for current systems such as the Ohio-class submarine.


“We want and we need a robust Armed Forces,” Santos said. “The Russian Federation invasion of Ukraine and the stand China has taken on world affairs, particularly towards Taiwan, made the need for a more powerful navy a matter of urgency. Unfortunately, the Biden administration wants to cut the size of our Navy, which is extremely dangerous because currently we operate around 297 ships of all types. The current administration is putting Americans lives at risk and we will not tolerate this.”

Santos criticized Deputy Defense Secretary Kathleen Hicks, who stated her desire to cut the number of traditional ships in favor of smaller vessels. Santos said her vision is at odds with plans set forth by the Navy and Marine Corp brass.

“It’s incredible that White House is trying to push the idea of less capital ships, and more small vessels. For example, the Deputy Defense Secretary, Kathleen Hicks, wants to cut the number of big transport ships the U.S. Marine Corp uses to ferry troops and to fly combat missions. She, a Biden appointee, wants small ships and other light vessels. This is a mistake. One area that makes America’s Armed Forces the best in the world is our logistical system, our transport and supporting platforms. Cutting into that will give our enemies a level playing field against us,” Santos added.

Santos wants to push for a 500 ship Navy, with new vessels for the Marine Corp, as well as a new replacement for the Ohio-class nuclear powered ballistic missile submarines, which is more than 40 years old.

Lt. Colonel Santos is campaigning as a decorated combat veteran with a distinguished record of more than 30 years of service in the United States Army. He served in Afghanistan, Colombia as well as in several American embassies in different parts of the world. He is also the only Latino candidate in the race.

On August 23rd, the crowded Republican Party primary will be held in Florida’s 7th Congressional District, which includes Seminole and Volusia counties, to determine the candidate who will represent the community in the November midterm election.