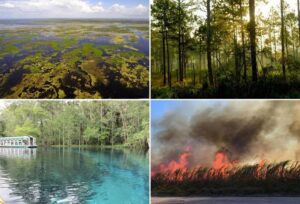 The scorecard from the environmental group considered the Governor’s actions on 23 bills across his tenure, but expanded to include issues related to “freedom” and “democracy,” including this year’s redistricting process. It also considered the Governor’s actions on other topics such as what Sierra Club labeled as his failure to heed the recommendations of the state’s own Blue-Green Algae Task Force and his administration’s failure to take robust action to protect the Everglades through meaningful investment in common sense and necessary restoration.


“More intense and frequent storms like Hurricane Ian, increased flooding, and loss of access to insurance are just a few of the ways climate change is impacting Florida,” said Emily Gorman, Sierra Club Florida Chapter Director. “Climate change is affecting Floridians now. We need a Governor who is willing to lead, not a politician spending taxpayer dollars on political stunts that harm real people.”

“Red-tide Ron DeSantis failed to do anything while his donors had their way with our environment – and we all pay the price,” said Crist. “This governor dumps millions of gallons of toxic water into Tampa Bay, causing the worst red tide I’ve ever seen, while ignoring the threat of climate change and failing to prepare our communities for ever-more dangerous storms.

As part of Sierra Club’s increased commitment to environmental justice and a free and fair Florida, the political group said their scorecard includes a section on freedom and democracy issues. This year, they said the Republican Governor pushed “his own illegal congressional map through the Florida State Legislature” and said the “bill violates both the State Constitution and federal law.” Sierra Club was a vocal opponent of the redistricting, calling it a “racial gerrymander which clearly favors his party and diminishes the ability of racial and language minorities to elect representatives of their choice.”

“Looking at the Governor’s record on the environment, climate change, conservation or democracy, it is clear that DeSantis has failed,” said Luigi Guadarrama, Sierra Club Florida Political Director. “Instead of taking action to protect Florida’s families, homeowners, and environment, DeSantis has dismissed all criticism as ‘left-wing rhetoric’ and left Floridians to literally foot the bill, whether it be through rate hikes by utilities or skyrocketing insurance premiums.”

Sierra Club also pointed to the failure to address multiple algal crises across the state has cost Floridian jobs and income. “His refusal to address the climate crisis at its root has left Floridians at increased risk of more destructive and powerful storms,” Sierra Club said. “His inability to address the property insurance crisis has forced many homeowners to lose access to insurance and others to pay ridiculous premiums. The DeSantis administration has not only hurt Floridians ability to thrive; it has threatened their ability to survive.”

The Sierra Club scorecard can be found here.