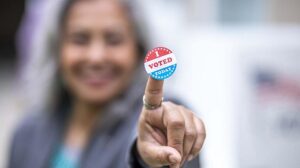 A national survey of Hispanic voters released by Americano Media, the nation’s first national conservative Hispanic network in Spanish, shows the Republican Party may be on the cusp of a profound Hispanic voter realignment, adding a last-minute burst of undecided voters worried about the economy.

“Our poll shows that while 14 percent of Hispanics are still undecided, half are leaning heavily toward voting for the GOP in the midterms,” Americano Media chief executive officer Ivan Garcia-Hidalgo said. “In some close races, how these still-undecided Hispanic voters break may decide the day. We think this indicates a very possible spike in Hispanic votes this year for Republican candidates.”


The Americano poll shows what Garcia-Hidalgo called “a perfect storm of frustration and pessimism among undecided Hispanics with the economic policies of President Joe Biden and the Democrat Party, and they are motivated to vote. While our poll confirms the rightward shift of Hispanic voters, we discovered that number seems set to jump on Election Day.”

With 43 percent of respondents self-identified as Democrats and 27 percent as GOP, Democrats lead the congressional generic ballot 50/36, with 14 percent undecided and split similarly among the two parties and independents. This is a remarkable finding, considering this 14-point margin is down from 30 percent in 2020 and 40 percent in 2018, according to exit polls.

Among this largely Democrat population, President Joe Biden is the only national politician with a positive image rating. Biden predictably wins a rematch with Donald Trump in a hypothetical 2024 race, 54/37 – remarkably, only half his margin over Trump with Hispanics in 2020. Biden also leads all other Democrats in a theoretical primary matchup, beating second place finisher former First Lady Michelle Obama, 36/14.

In a theoretical primary matchup Trump beats Florida Governor Ron DeSantis, 48/30. Still, according to Americano’s Florida-focused research, DeSantis beats his gubernatorial re-election opponent Congressman Charlie Crist among Hispanics 49/45. While DeSantis has a 52 percent favorable and 44 percent unfavorable rating with Florida Hispanics, Crist is at 40/46, proving many Hispanic Independents and Democrats plan to vote for DeSantis.

A significant majority of Hispanics (71%) consider the country headed in the wrong direction and that the economy is also headed in the wrong direction. The economy matters most to this demographic, with inflation and jobs logging in at 40 percent of people’s top priority. Among Hispanics, the economy completely eclipses the wedge social issues the media often focuses on. In fact, by a 65/31 margin, inflation is more important to deciding their vote than abortion.


The Americano poll, conducted October 11-20 by Fabrizio-Lee and Associates, interviewed 1,200 Hispanic registered voters and has a margin of error of 2.8 percent. The team also oversampled Florida Hispanic registered voters to discover valid answers to Florida-specific questions. Interviewers conducted the poll using landline, mobile phone and text-to-online methods. The poll was offered in English and Spanish, with 78 percent responding in English and 22 percent in Spanish.

For more information and topline findings, please go to www.AmericanoMediaPoll.com to download the Americano poll results.