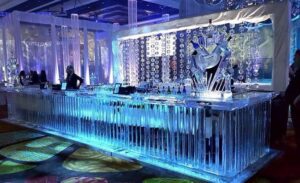 Ice Pro owners Joe and Lianne Rimer have suitably joined forces with ICEBAR Orlando owner Thom Kerr, who has acquired the newly named Ice Professionals of Florida, which will still be operating under the known and loved Ice Pro brand. Their team of award-winning professional ice sculptors have turned ideas, from extravagant ice creations to craft cocktail ice, into a cool shimmering reality for people all over the world.


“As the major supplier for ICEBAR Orlando, I’ve had a long-standing relationship with Ice Pro, and so it was a very natural and appealing opportunity to join forces,” said Kerr. “We decided on moving the headquarters to Orlando to better serve the Central Florida market, the company’s biggest portion of the market, and we are very excited to add positions, grow the company and get bigger and better together.”

“We’ve worked with Thom for years in his role with ICEBAR,” Rimer continued. “Together, we have an incredible vision to expand our footprint of what we do and better service our clients all across Florida.”

With nearly 15 years of experience carving for a wide variety of corporate and private events as well as esteemed organizations, including professional sports teams, luxury hotels, and many more, Ice Pro says they are unmatched, custom designs turn ice into art for any special occasion.

Joe Rimer is certified by the National Ice Carving Association as an Ice Carving Professional and Competitor as well as certification as a Lead judge. He has also previously served on the NICA Board of Directors. Joe is an International Competition Champion and Guinness World Record holder.

The relocation to Orlando should help the business better serve Central Florida as the company looks to expand.