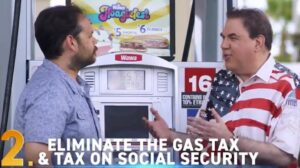 In his bid to return to Congress, Democratic candidate Alan Grayson is targeting two “regressive” taxes as a way to bring direct relief to people. He wants to repeal the gas tax and the tax on Social Security benefits permanently, using his previous experience in Congress to deliver real results for people.

“My plan is to focus on two regressive taxes, ones that hurt a lot more people than a tax on billionaires does,” Grayson told West Orlando News. “Both of these taxes really hurt people who are struggling to make ends meet and these two are taxes that are as unfair as a tax can be.”


On eliminating the gas tax, which Grayson calls a tax on driving, the Democrat is clear on the need to make it permanent.

“Rather than talking about holidays, I would repeal it completely,” Grayson said. “The federal government raises some money for the highway trust fund, yes, but this is one of the few areas that is funded through a specific regressive tax. In fact, the federal government taxes alcohol, tobacco, and driving. Which one sticks out?”

To fund transportation and road building needs, Grayson prefers progressive sources of revenue, using the federal income tax as an example. He said he would push to fill the gaps and pay the obligations through general funds in the budget, like most things are funded at the federal level.

“I think it is unfair to tax someone who needs to drive to work,” Grayson added. “People need relief and that means eliminating the federal gas tax permanently.”

On taxing Social Security benefits, Grayson called it “double taxation” and called it “unconscionable.” This is an issue he was already working on previously in Congress, and he said he would pick up right where he left off.

“The Grayson-Massey Act tried to end the double taxation of Social Security benefits,” Grayson said. “I would get right back to work on that as soon as I return to Congress. We’re taxing some of the neediest people at a time they need it the most. It’s unconscionable.”

He described the situation as workers being taxed in full on every dollar put in the system, and then they get taxed again when the system pays out. He said workers, especially those earning around $30,000-$40,000 a year like many in Orlando, pay income, Social Security and Medicare taxes on the first dollars they make.

“It’s classic case of double taxation,” Grayson said. “As a worker, there’s no money that ever escapes that taxation. Then you work your 40 years in the labor force, you retire around 67, and you discover the benefits you paid in are now taxed again when they pay out to you.”

He also said it’s particularly true when seniors have to continue to work even after retirement, an issue that is becoming more common in the current economy. “A tax on people in retirement age is already bad enough, but they are taxed because they cannot survive on their Social Security benefits and then those benefits get taxed. Most Democrats and Republicans recognize the injustice of the situation.”

Grayson believes this is an issue that can get bipartisan support and that is why he is confident he can deliver on this campaign promise to cut taxes.

“If someone digs in and tries hard to get both sides to sign up, this is an area where you can actually make a difference,” Grayson said. “I think that given the fact that Republicans are adamant in not repealing the Trump tax cuts, we need another way to the goal line to help people. I want to get things done that will help the most people.”

RELATED: Grayson Details His Plan to End Tolls on SR-408