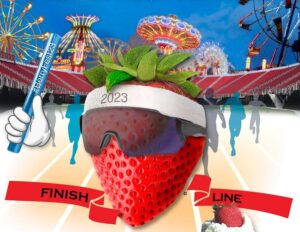 The Florida Strawberry Festival announced today the theme for its 88th annual event – “We Have a Winner!”

“Yes, it points to the recent win we achieved in naming strawberry shortcake as Florida’s official dessert as we’re a little partial to the berry,” said President Paul Davis. “We’re excited about this year’s event and look forward to sharing in the celebration of the shortcake dessert that has come to make us so successful!”


A new theme is created for each year’s festival to offer patrons a glimpse of the experience they will have at the 11–day event. It also unifies vendors, FFA chapters, organizations, corporate partners and exhibitors, who create parade floats and displays throughout the event.

The Festival’s strawberry character featured in each year’s theme artwork is an iconic part of the event’s branding and advertising efforts. In this theme’s artwork, he wears a sweatband, waves a #BerryFest23 baton and holds a plate of strawberry shortcake as he crosses the finish line.

The Florida Strawberry Festival also released its lineup of headline entertainment artists performing on the Wish Farms Soundstage at the 2023 event. The lineup is as follows:

Advance tickets for admission and for headline entertainment shows will go on sale Thursday, December 8, 2022 at 8am and can be purchased online, at the Amscot Main Ticket Office located at 2209 W. Oak Avenue in Plant City and by phone at 813–754–1996.

This past year, state Rep. Lawrence McClure and state Sen. Danny Burgess filed a bill to designate strawberry shortcake as the state’s official dessert. Earlier this year, Governor Ron DeSantis visited the Festival grounds to officially sign the bill into law. Many local producers of strawberries, vegetables and cattle, along with Festival executives, City of Plant City officials and local law enforcement were present at the assembly to witness Gov. DeSantis signing bill SB 1006, which took effect July 1, 2022.

“The strawberry industry has an economic impact of more than a billion dollars in the state of Florida,” said Davis. “Plant City is home to roughly 12,000 acres of strawberries and the Festival serves just about 200,000 shortcakes each year. We’re proud of our city and the Florida strawberry. It’s kind of a big deal around here!”