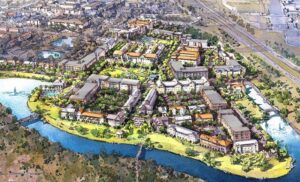 This initiative will help offer a viable solution to one of the nation’s – and Orlando’s – greatest challenges. The development is expected to include more than 1,300 units.


After a thorough search, Walt Disney World chose The Michaels Organization for its long-standing track record in building and managing attainable housing communities, saying it is a prominent developer known for creating high-quality homes in communities across the country and here in Central Florida. Negotiations between Walt Disney World and The Michael’s Organization on a definitive agreement for the project are underway. With over 425 communities in more than 35 states, The Michaels Organization has provided comprehensive solutions to affordable housing for many years and is the largest privately held owner of affordable housing in the country. The development will be open for qualifying applicants, including Disney cast members.

“For more than 50 years, Walt Disney World has cared for and invested in our community, and we’re committed to being a part of this solution which will bring more attainable housing to Central Florida,” said Jeff Vahle, president of Walt Disney World Resort. “We will continue to find ways to use our resources to make a difference in the community we call home, and we’re excited to take this step with a nationally recognized developer.”

“We are excited to work with an iconic brand like Disney to deliver attainable housing for the Central Florida community,” said Michaels CEO John J. O’Donnell. “Our goal is to create a repeatable model that we hope will inspire other companies and municipalities to create high quality, attainable housing in their own communities.”

The initiative is one of many ways Disney engages with local leaders to help the community find lasting solutions to this issue, from making monetary donations, to contributing supplies to local organizations in need, to providing assistance through the Disney VoluntEARS program and more. The development – which is planned to be privately financed – will be limited to applicants within a certain income range. This initiative will support and build upon Orange County’s Housing for All action plan to address housing affordability for local residents, an action plan brought about by Mayor Jerry Demings.

Earlier this year, Walt Disney World and Disneyland Resort donated $300,000 to local food banks to support people in the community facing food insecurity. That donation was just part of the $5.5 million Walt Disney World has contributed to important community causes during the ongoing 50th Anniversary celebration, including organizations on the frontline of addressing the need for affordable housing, like Hope Partnership.