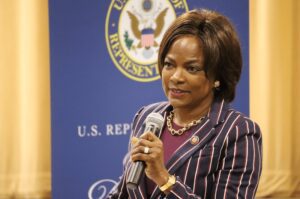 On September 16th, Representative Val Demings joined 55 of her colleagues to call on the Biden Administration to immediately halt deportations to Haiti and take urgent action to address the concerns of the Haitian Diaspora after a 7.2 magnitude earthquake devastated Haiti last month. That weekend, the U.S. border between Mexico was flooded by mostly Haitian immigrants who crowded under the International Bridge, complicating the entire matter. Rep. Demings called the images from the border “disturbing but not new” and called for immediate action from the administration and from Congress.


The lawmakers’ Haiti letter to Secretary Alejandro Mayorkas and Secretary Xavier Becerra followed the Administration’s resumption of deportation flights to Haiti and as thousands of Haitian migrants continue to await an opportunity to make an asylum claim at the border. Rep. Demings’ name joined more far left names like Rep. Ayanna Pressley and Rep. Alexandria Ocasio-Cortez along with moderates like Virginia Rep. Abigail Spanberger on the Haiti letter.

Over two thousand Haitians were killed and twelve thousand more have been seriously injured as a result of the earthquake on August 14, 2021, and many cities have been reduced to rubble.  This earthquake struck areas of Haiti that were already experiencing extreme vulnerability, with some 4.1 million Haitians—more than a third of the total population—living with food insecurity, and 2.1 percent of children suffering severe malnutrition. All of the conditions leading to the Biden Administration’s original Temporary Protected Status (TPS) redesignation on May 22, 2021, the assassination of President Jovenel Moïse on July 7 and now the August 14 earthquake and subsequent tropical storm make safe return to Haiti completely impossible.

In response to these ongoing events, the lawmakers urged the Administration to:

Last week, Rep. Demings issued a statement regarding the border situation more directly. “We are a nation of laws and a nation of values, and we must uphold both,” Rep. Demings said. “The images from the border this week are disturbing but not new. The unacceptable treatment of Haitian immigrants is a sad symptom of a broken system that for decades under Republican and Democratic presidents has failed to stabilize our border and has harmed innocent families seeking the American Dream after fleeing from disaster and danger. I have called for immediate action from the administration and from Congress to build a safe, orderly, and controlled immigration system where all people are treated with dignity and respect. The American promise is a special thing. We must live up to it.”

In May, on Haitian Flag Day, Reps. Pressley, Levin, Clarke and Demings announced the formation of the House Haiti Caucus, a Congressional caucus dedicated to pursuing a just foreign policy that puts the needs and aspirations of the Haitian people first.

View the full Congressional letter regarding the immediate concerns of the Haitian Diaspora here.