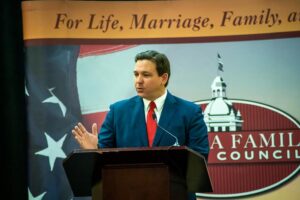 A new report is claiming Florida will see a 29 percent increase in maternal death rate should a statewide ban on abortion go into place. According to the report, Florida would see a death rate higher than the national average.

Florida Democrats warn that Republican Governor Ron DeSantis, who may also have presidential ambitions, could support passing an all out abortion ban should he be re-elected, Charlie Crist says Gov. DeSantis consistently avoids answering for his future plans on women’s reproductive rights.


“This harrowing new report reveals what many in Florida have known for months – the lives of millions of women in the Sunshine State are on the line this November,” Crist said. “Make no mistake, Ron DeSantis wants to ban abortion completely. And now we know just how much blood will be on his hands if he’s re-elected.”

Crist has tried to put the campaign focus on the issue of abortion and women’s reproductive rights, even hosting a choice phone bank with Orlando Rep. Anna Eskamani, Planned Parenthood, NARAL, and the Democratic Women’s Club.