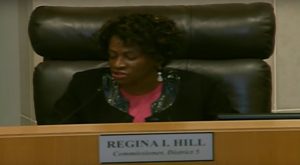 In what appears to be the most serious legal questions to date, new details are emerging from another official complaint filed with State Attorney Aramis Ayala’s office against Orlando City Commissioner Regina Hill today, this time alleging affordable housing fraud. West Orlando News has now obtained a copy of the full complaint and all attached evidence turned in this afternoon to the State Attorney.

There are even serious questions being raised about why Orlando City Clerk Denise Aldridge would have qualified the incumbent commissioner to run for re-election and if there may be post-election consequences even if Hill wins next week. Orlando City Clerk Aldridge was not in her office this afternoon for comment and has not responded to requests from West Orlando News for clarification and a further investigation into documents provided by Hill. The City Clerk’s office did confirm today that Aldridge personally reviewed every document for candidate qualification and conducted a “thorough review” before qualifying any candidate. The Clerk is appointed by Mayor Buddy Dyer, who has endorsed Regina Hill.


The complaint focuses on the current residence of incumbent Commissioner Hill, an apartment in the affordable housing complex called the Landings at Timberleaf. To qualify for office, every candidate must provide proof of residency, utility bills to show energy use, and other documents before the City Clerk certifies qualification. However, the first red flag is that Commissioner Hill’s name is not on the lease or the power bills for the apartment, even though a notarized document included says she has been living there since 2015.

Even more troubling, Commissioner Hill’s daughter who was murdered more than 2 years ago is still the name listed on the Orlando Utilities Commission bills.

Why would the Commissioner not change the name on the energy bills and why would OUC still invoice someone who was murdered so long ago? Because Regina Hill can’t legally put herself on the bill without her name being on the lease or jeopardizing herself by admitting she is living there. Why can’t Commissioner Hill put her name on the lease? Because she can’t legally rent an apartment at the Landings at Timberleaf.

The Timberleaf apartments are an income-based, or income-restricted, affordable housing complex which limits how much money any resident is allowed to make. These apartments are for those in our community most in need. That’s why a 2-bedroom apartment only costs about $644, according to the lease agreement provided by Hill. The name on the lease is Yaprece Gordon, who was the cousin of Hill’s daughter. Also listed on the lease is Hill’s grandson, but not Hill herself. The title of the lease boldly states “Florida Tax Credit Lease Agreement” and pre-approval applications state the management can regularly verify income status among other details, including who is residing at the location. According to Timberleaf, all 240 units are identified as low-income housing tax credit apartments (income-restricted).

Orlando City Commissioners recently voted themselves a pay raise despite raising taxes and cutting services for residents. Their new annual salary is $58,000.79. That’s not a secret. But the Landings at Timberleaf restrict income levels so that the affordable housing can actually be used by those who need it, not by City Commissioners making nearly $60,000/year.

According to the front office at the Timberleaf apartments, the maximum yearly income for two residents in an apartment is $28,000/year and the maximum yearly income allowed for three residents is only $31,000. Whether Yaprece Gordon is in fact living in the 2-bedroom home with Commissioner Hill and Hill’s grandson is undetermined, but in either situation Hill’s salary as City Commissioner would violate the affordable housing policies. That’s likely why despite living at this address since 2015, Commissioner Hill never added herself to the lease, even though the last one was signed in December 2016.

Also, Yaprece Gordon is registered to vote in Winter Garden and voted at her Winter Garden address as recently as 2016. Gordon also lists her home as Winter Garden on her Facebook account. This raises the serious question of whether Commissioner Hill is using a family member, Gordon, to apply and be approved for the affordable housing apartment, which is cheating the system and blatant fraud, according to the filed complaint. Gordon signed a notarized letter to the City of Orlando saying Regina Hill is her roommate, and in another troubling twist the notary is absentee ballot broker Sandra Lewis, who has received thousands of dollars in campaign payments from Hill. Also, if Gordon is living in this apartment, why is she voting from her Winter Garden address?


From her own qualification documents, it now appears Commissioner Hill is in fact committing housing fraud by illegally renting her city apartment and has been doing so since 2015, based on evidence attached in the complaint filed with State Attorney Ayala. Hill’s only other known home is one she owns outside of the city limits, which has also been at the center of its own controversies.

In this election, there has already been one complaint filed against Commissioner Hill alleging “malfeasance and official misconduct”. Also, Hill’s paid campaign staff, employees of Sandra Lewis mentioned above, have been recorded by concerned voters as they attempted to collect absentee ballots in the ongoing pay-for-votes scheme to favor Regina Hill.

This is a breaking news story and the investigation is ongoing. Stay tuned for more updates.