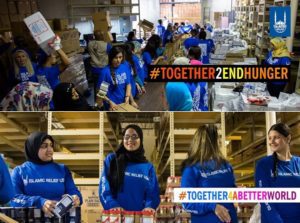 Islamic Relief USA will hold its annual Day of Dignity campaign in major cities throughout the country, including one in Orlando, with its partner, Arab American Community Center of Florida on November 4th.

The Day of Dignity campaign consists of a series of events held around the nation to help people who are homeless or from low-income households, among other sociological conditions, gain access to meals, winter coats, hygiene kits, and health screenings. The Orlando Day of Dignity campaign will take place on Saturday, November 4th, from 2 to 7:30 pm at the Coalition for the Homeless, located at 639 West Center Boulevard.


Islamic Relief USA works with various community organizations throughout the country to help facilitate the events.

“Islamic Relief has held the Day of Dignity campaign for several years,” said Anwar Khan, president of Islamic Relief USA. “The events enable people who are in some of the direst circumstances to get access to necessary items and services. Poverty and homelessness, unfortunately, remain major problems and indications are both problems may grow worse. Thus, Day of Dignity events provide a major service. In addition to receiving food, clothing and health care, they also learn about the different agencies and other entities that exist which they can connect with and continue receiving the guidance and resources necessary to help them get on a path toward self-sufficiency.”

The events put a spotlight on the effects of poverty, which remains a persistent problem in the United States. According to the U.S. Census Bureau, more than 43 million suffer from poverty as of 2015. The problem could grow worse if recently announced cuts to various social services are enacted by Congress.

Day of Dignity helps provide, at least for a day, relief from the regular hardships that are faced by an impoverished population, regardless of race, creed, or nationality.