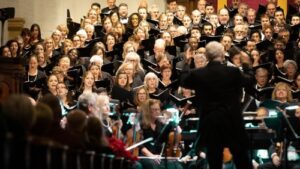 This December, the Bach Festival Society of Winter Park continues its Christmas concert tradition outdoors at the final program for the Dr. Phillips Center Frontyard Festival. The performances feature more than 200 members of the Bach Festival Choir and Orchestra and the visiting Jacksonville Children’s Chorus.

“We are proud that the Bach Festival Classic Christmas program has grown to become a must-see holiday tradition,” said Sinclair, who looks forward to the events that mark the beginning of the holiday season for many Central Florida families. “Music of the holiday season can speak directly to the heart, and our goal is to provide a program that does exactly that, full of the joy and magic that only music of this season can bring.”

Founded in 1935 in Winter Park, Florida, the Bach Festival Society is one of the longest continuously operating Bach Festivals in the country and is well ranked among America’s great oratorio societies. The Bach Festival Choir and Orchestra bring the highest caliber of classical music to Central Florida in the intimate settings of Tiedtke Concert Hall and Knowles Memorial Chapel on the Rollins College campus for the Society’s Annual Bach Festival, Choral Masterworks, and Visiting Artists performances. It presents a variety of educational and community outreach programs year-round.

The Bach Festival Society of Winter Park is supported in part by numerous individual donors; the Elizabeth Morse Genius Foundation; the Jessie Ball duPont Fund; the Winifred Johnson Clive Foundation: Orange County Government through the Arts & Cultural Affairs Program; United Arts of Central Florida, host of OrlandoAtPlay.com and UAArtsEd.com; and by the State of Florida, Department of State, Division of Cultural Affairs and the Florida Council on Arts and Culture.

Tickets start at $35, with a two-ticket per-pod minimum and are available at BachFestivalFlorida.org or by phone from the Dr. Phillips Center Box Office at 407-358-6603.