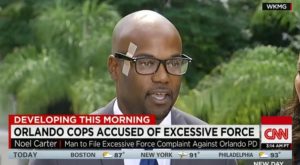 UPDATE: Noel Carter was found guilty of 2 of 4 charges, including battery on a law enforcement officer. Sentencing will be September 26th. Carter is currently out on bond.

Noel Carter is an educated, successful member of the community who found himself in downtown Orlando as a tourist on a night that would make his life a living hell. The 31-year-old banker from South Florida currently finds himself waiting for a jury to decide his fate in a controversial case centered around the question of whether Carter is guilty of felony battery or if he is a victim of police brutality and excessive force. There is video of the beating, the officers’ reports of the incident do not add up and many questions were raised in the trial about violations of policies and procedures by the officers, but prosecutors and city officials still want Carter in jail for what happened?

Noel Carter was beaten, kicked, pepper sprayed and tased by Orlando Police Department officers who were moonlighting for Venue 578 downtown. When Carter took the stand yesterday, he detailed the painful assault by police officers. He testified the brutal attack made him fear for his life. As police hit, kicked, pepper sprayed and used a taser against him, Carter told jurors he was never once told he was under arrest. The incident was captured on video, by many sources, and still the City of Orlando and State Attorney Jeff Ashton continue to push felony charges against Carter. What kind of message does this send to the community? To minorities? To tourists?

The defense team described how OPD officer David Cruz shoved Carter first. Cruz and officer Charles Mays tased, pepper sprayed and hit Carter with a baton during a six-minute altercation. The video recordings that showed Carter being kicked six times while on the ground were covered in national news. Prior to the trial, the public was aware of two videos, but a total of five video recordings were presented during the trial and scrutinized by the defense.

“The responsibility of police officers is to de-escalate situations,” defense attorney Patrick Lawlor said. “That is what they are trained for. Officers – we respect them – they do amazing things and put their lives out on the street. But sometimes they don’t do what they need to. That’s the essence of this case.”

Carter’s defense also exposed how the officers changed their written statements along the way. There were also questions raised about violations of OPD policies and procedures by the officers involved. The situation never should have escalated to violence and police officers could have done more to calm the situation, rather than inflame it.

But how did the situation even escalate to level it reached? Officers stepped in when they claimed Carter was involved in a domestic incident downtown, supposedly touching a woman. But the woman in question, Carter’s ex-girlfriend, said there was no battery and did not cooperate with prosecutors. The defense maintained through the end of the trial that officers had no legal basis to ever place Carter under arrest and that the force used against him was excessive and unnecessary.

Why is Jeff Ashton, who is up for re-election in August, pushing this case? The State Attorney was in the court room for closing arguments today, perhaps checking in on the controversial trial being pushed by Mayor Buddy Dyer, OPD and the City of Orlando. We have witnessed Ashton’s office literally release criminals like City Commissioner Regina Hill’s son, who was charged with illegal gun and drug possession after a sting operation, because it was “not suitable for prosecution.” Hill’s son wound up in trouble again just months later, surrendering to police this summer on different gun and drug charges.

If that case was “not suitable for prosecution,” how can the case against Noel Carter make it this far?

From the start, this case should have been focused on Orlando’s police brutality and excessive force against Noel Carter, but instead it is Carter who is facing two felonies and two misdemeanors for resisting arrest and battery on a law enforcement officer. After Ashton’s office quickly cleared the officers involved, the case should have been closed, but instead Ashton took the side of the City and targeted Carter with hyped up charges unnecessarily. Democratic Mayor Dyer and OPD knew there was a very strong chance a lawsuit would be filed against them – and they clearly wanted to make an example out of Carter. Attorney Natalie Jackson told jurors Noel Carter “became public enemy No. 1 of the Orlando Police Department.”

Ashton could have called the case against Carter “not suitable for prosecution” but he did not. He chose to prosecute and bring Orlando’s bad side out through this trial. The world got to hear how a minority tourist, trying to make it out of downtown Orlando, was beaten by police and feared for his life. Meanwhile, our City and State Attorney want to put him in jail after all this.

Assistant State Attorney Ryan Williams is also being blasted by Carter’s defense team for controversial comments he made during closing arguments. “When we have state attorneys who don’t know human rights laws or dabble in dog-whistle politics for a verdict, we are in trouble as a nation,” Jackson warned as she called out Williams’ comments.

“I never felt so helpless in a courtroom,” said community leader Lawanna Gelzer, who has been observing the trial. “This is all retaliation, that’s all this case is. I’ve never seen such a blatant violation of civil rights and a miscarriage of justice right here in our own community. This trial is sending all the wrong messages.”

“It has been painful to sit through this trial and our thoughts and prayers remain with Noel Carter and his family,” Gelzer added.

Even after the verdict, the Noel Carter case is far from being over.

This story has been updated to reflect new information and clarifications as more updates have become available. Stay tuned.