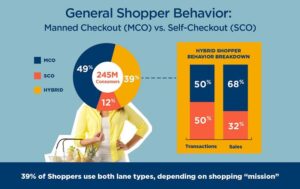 With self-checkout (SCO) lanes becoming more prevalent at grocery and drug stores across the U.S., shopper intelligence leader Catalina has issued a study that shatters broad generalizations about shoppers not liking the SCO option overall and not using coupons when they do use it.

Catalina initiated its study — which assessed data from 4.5 billion UPC-level transactions by 245 million consumers accounting for $222 billion in sales in the U.S. in 2021 — as more retailers make sweeping shifts from manual to SCO lanes to offset shrinking margins from inflation, respond to social distancing protocols triggered by the pandemic, and take advantage of automation technology.

The Rise of Self-Checkout Lanes


The number of SCOs in the U.S. has increased 10% in the last five years, with Catalina estimating that they now account for nearly 40% of lanes in grocery chains in the U.S. — a number that continues to grow as retailers like Walmart, Kroger, and Dollar General test pilot stores that offer only SCOs, per CNN. As more retailers make these moves in the U.S. and around the globe, Catalina advises they consider insights from its Shopper Intelligence Platform, underscoring that most consumers want both manual and SCO options.

For this SCO study, Catalina segmented shopper IDs into three segments: SCO-only, manned checkout-only (MCO), and a hybrid of SCO and manned lanes. Their choice of which lane to use depends on their shopper profile and purchase occasion. Surprisingly, more consumers have shifted from SCO-only to manual-only lanes year over year, but those who use both consistently have the highest retention rates and best customer value.

How Lane Choice Links to Purchase Behavior
Catalina data shows that 39% of shoppers used both lane types in 2021, depending upon their shopping mission. 49% of shoppers preferred the personal attention offered in the manned-only lanes, while only 12% of shoppers were steadfast SCO-exclusive fans. Breaking down the behavior of the hybrid shopper, their transactions were split 50-50 between MCO and SCO, with MCO accounting for 68% of sales and SCO for 32%.

Among other insights uncovered in the study: SCO-only shoppers had smaller baskets and bought less than hybrid and MCO fans. Instead of grocery stores, SCO-only customers likely do pantry loading in other channels, such as mass retailers or online. Hybrid shoppers produced the highest customer value ($1,720) and made 36 shopping trips per year in 2021.

Catalina’s analysis further shows MCO-only shoppers are primarily Baby Boomers and Silent Generation consumers with household incomes under $100K and a high school education. SCO-only shopping also attracts the Silent Generation, as well as 19 to 24-year-olds. Those who use both SCO and MCO lanes are a mix of different demographics and tend to have an annual household income topping $100K, which is higher than the other segments.

For each checkout segment, Catalina analyzed which shopper personalities and affinities rise to the top. For example, Natural Flavor Seekers and Tree Nut Avoiders use SCO lanes more than other segments while Caffeine Seekers and Partially Hydrogenated Oil Avoiders choose MCOs. Those that toggle between both options tend to be Ingredient Conscious Seekers.

“In our view, retailers should evolve to create a balance of self-checkout and manned lanes to accommodate more multi-dimensional shopper profiles, improve customer experience, enable cost efficiencies and maximize sales for the long term,” said Wesley Bean, U.S. Chief Retail Officer for Catalina. “Until recently, shopper profiles generally grouped consumers by demographics and where they are on the purchase funnel. Now, retailers can layer in check-out preferences and shopper affinities to create a more personalized shopping experience and reach individual shoppers with messages that matter.”

Coupon use at SCO lanes
The Catalina study also bucks conventional industry presumptions that shoppers won’t take the time to use coupons in SCO lanes by citing a pilot program it conducted with a regional grocery retailer that compared the six-month performance of SCO shoppers who received ads with SCO consumers who did not. Both companies then measured post-campaign redemption rates to the previous year by region and type of checkout lane. They were surprised to learn SCO lane shoppers who received coupons drove four times more sales growth than the SCO checkout lanes with suppressed incentives. When compared with the six-month pre-period, these coupons accounted for an 181% in sales growth versus the control group, which posted a 40% increase. Data analytics demonstrated the incentives attracted new shoppers, engaged lapsed buyers, and contributed to an increase in store visits.

Catalina rounded out its SCO study by offering advice to retailers planning their long-term automation strategy for checkout lanes. Suggestions include: