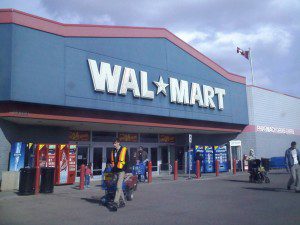 Wal-Mart is planning to abandon the minimum wage.

On Wednesday, Wal-Mart’s CEO Douglas McMillion told reporters that the company plans to pay all workers at a rate higher than the federal minimum wage of $7.25 per hour, although he declined to say how much more.

“It is our intention over time that we will be in a situation where we don’t pay minimum wage at all,” McMillon said, according to news reports.

The average hourly Wal-Mart worker is paid $11.83 an hour. That’s below the average hourly earnings of $14.46 for all non-supervisor retail employee last month, according to the Labor Department, the Wall Street Journal reported.

It is not clear what motivated Wal-Mart’s decision, but a spokesperson for the retailer giant, Brooke Buchanan, told the Huffington Post: “We’re looking at how we can take care of our associates and engage them, not only to transform our workforce here at Walmart, but also to transform the workforce here in the U.S.”