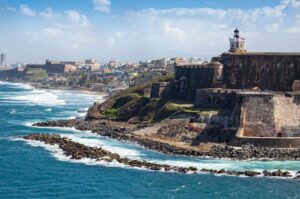 Congressman Darren Soto, the first Puerto Rican from Florida elected to Congress, introduced a bipartisan House Resolution this month that would support Puerto Rico’s plebiscite results and call upon Congress and the President to take action in 2021 if Puerto Ricans vote for statehood. The plebiscite, scheduled to take place on November 3rd, will allow the people of Puerto Rico the opportunity to vote for statehood or independence.  It will occur in a general election where turnout is at its highest. These changes are critical as they correct concerns over past plebiscites.


“Come November, Puerto Rico has a new opportunity to take a step forward in addressing its status,” said Congressman Soto. “On the first day of Hispanic Heritage Month, the introduction of our resolution is about respecting democracy and the will of the people of Puerto Rico. If Puerto Ricans vote for statehood, we must take action to admit the 51st state of our Union!”

Puerto Rico has been hit by Hurricane Maria and Hurricane Irma, racked by recent earthquakes, burdened with an over decade long recession, endured drastic cuts from a PROMESA fiscal board and now, is in the midst of a COVID-19 pandemic. In light of these serious challenges, Rep. Soto and several of his colleagues believe Congress must respect the choice of Americans in Puerto Rico to determine their form of government, including electing to be a state and having two U.S. Senators and four U.S. Representatives advocating for them in Washington.

“The 3.2 million American citizens residing in Puerto Rico deserve equality including the right to vote for their President and members of Congress as well as equal treatment in federal programs. Now, more than ever, we must continue to fight and be a voice for all Puerto Ricans. We will do our utmost to ensure that Congress grants Puerto Rico statehood if the voters choose this status option in the upcoming plebiscite. I thank my colleague, Congressman Darren Soto, for being a strong supporter of the people of Puerto Rico and for introducing this resolution to reach our full potential—equality with the 50 states,” said Congresswoman Jenniffer González Colón.

If voters select statehood, Puerto Rico would be the first majority Hispanic state admitted to the Union. New Mexico is close behind with a little over 49% Hispanic residents. This would greatly expand Hispanic political power in the nation’s Capital.