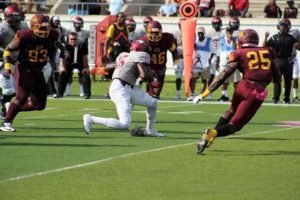 Malcolm Bell was good for 295 yards and two TD passes, coupled with a TD run to lead North Carolina Central to a 31-14 thrashing of Bethune-Cookman in a game ruled by lightning and an inept Wildcat offensive attack. The win was NCCUs first victory against the Wildcats since 1994.

The Wildcats are sitting on a goose egg where wins are concerned this season. The atmosphere at Municipal stadium had an air of hopelessness to it. This was the eighth football meeting between NCCU and Bethune-Cookman since 94’. Bethune-Cookman led the series 6-2, including six straight victories until Saturday.

The Eagles were more than happy to add to the woes of their nemesis. Last season, B-CU rallied from a 26-7 third quarter deficit and blocked a potential game-winning 18-yard field goal try with just 32 seconds left to edge NCCU 28-26 in Durham. The sweet revenge effectively shattered B-CU’s Mid-Eastern Athletic Conference (MEAC) home opener. 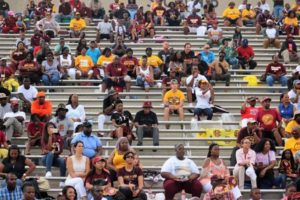 Floridians are accustomed to early Fall afternoon thunderstorms. However, this season, the Wildcats either weren’t able to finish, or flat-out lost games delayed for weather.

The game against the Eagles of North Carolina Central University was no different.

Sunny skies and a few puffy Cumulus clouds greeted me as I parked in front of Municipal stadium Saturday afternoon. The clouds continued to build throughout the first half. Jamaruz Thompkins scored B-CUs first TD on a 17-yard run. NCCU was quick to respond with Bell’s 25-yard TD toss to tie the game just before halftime. Meanwhile, those pesky Cumulus clouds continued to expand, eventually becoming Cumulonimbus clouds or “Thunderheads.”

In the third, Bell orchestrated a 77-yard drive to give the Eagles a 14-7 lead on his 4-yarder to Glen Calvin with 9:58 remaining. NCCU struck again with a 27-yard field goal by Brandon McLaren.

With the Wildcats down 17-7 and 6:35 on the clock in the third quarter, and immediately after a made field goal by NCCU. The players were sent to the locker rooms, the band followed and Patrons were asked to clear the stands. Per NCAA and Daytona Beach Municipal Stadium rules, each lightning strike within a three-mile radius of the stadium resets the clock before play may resume.

No sooner than the players returned to the field and began warming up and fans settled into their wet seats did another lightning strike clear the stands again. This time the game was delayed until 7:55pm.

In a fourth-quarter riddled with penalties, Bell completed five passes for 79 yards, then ended the drive with a 3-yard touchdown scamper to give NCCU a 24-7 cushion with nine minutes left in the contest.

The Wildcats kept hope alive after a 41-yard punt return by Frank Brown pushed the pigskin to the Eagles 15-yard line. On the first play from scrimmage, back-up quarterback Larry Brihm, Jr., back from an earlier injury, connected with Brown for a touchdown to pull to within 24-14 with 4:53 on the clock.

NCCU responded with a six-play, 61-yard drive, ending with Ramone Simpson racing 40 yards into the end zone for the final score.

The reality is that the Wildcats are 0-4 overall and 0-2 in MEAC play. This is a far fall from defending league champions. I could hear all the howling in the stands and was privy to plenty of sideline conversation I won’t disclose all of that but there was certainly talk about perhaps not attending homecoming this year. I shall go on record here. If you don’t attend homecoming because of a slow start to the season YOU SUCK!

“This was a sign that we have to learn to finish games,” said B-CU second-year head coach Terry Sims. “We had some guys back who could help us today, but we had opportunities to score and couldn’t finish. We could have stopped them and we just didn’t.”

Suffice it to say things will get worse before they get better and the Wildcats better find ways to score the football and keep momentum on their side.

Bethune-Cookman travels to Orangeburg, South Carolina next Saturday for a 1 p.m. matchup against South Carolina State. The Bulldogs are 1-0 in MEAC play, their win is over Florida A&M 48-14 a week ago. No matter, Wildcats and Bulldogs aren’t the best of friends. 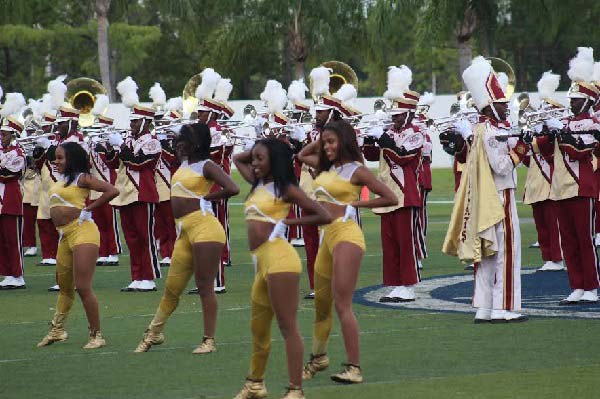 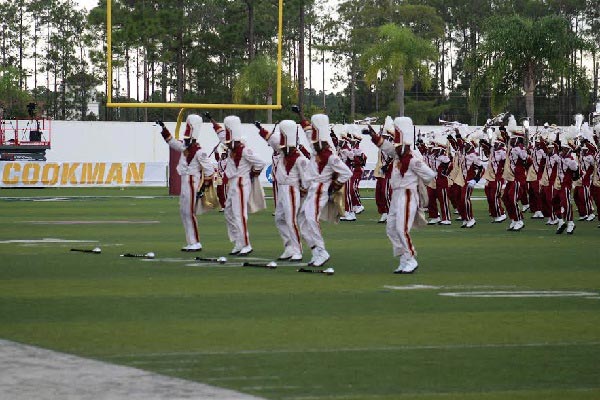