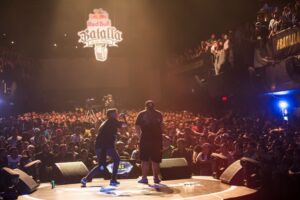 The largest Spanish freestyle rap battle in the world, Red Bull Batalla,  announced the U.S. qualifiers, 36 of the country’s most dynamic lyricists, who have been selected to battle-it-out in this year’s competition. Batalla shared the U.S. Finals will take place in Los Angeles on September 18th ahead of the Batalla World Finals. Several are from the Orlando area. Please find a full list of qualifiers and returning finalists announced below.


In this bracket-style battle event, the Qualifer Phase will pit the 36 ferocious freestyle competitors face-to-face in battles captured in Austin, Los Angeles, Miami, and New York.  who qualified will go round for round showcasing their most impressive bars in hopes of advancing as one of the 13 most dynamic lyricists who will move forward. These 1v1 battles will be reviewed by a special panel of judges during a live event on the official Red Bull Batalla Twitch channel taking place on August 12th at 4pm PST/7pm EST. The panel of judges, including former Batalla competitors Tito Yang, Kim MC and Cuban rapper El B, will evaluate the talent and skills of the MCs and decide if one, both, or none of the competitors is selected to move on to the USA National Final. Judges will assess the freestyle ability of each individual MC, and not who beats whom. Multifaceted Argentinian artist and media professional Muphasa is set to host the live Twitch event.


Following a record-breaking 2020 season, Red Bull Batalla has selected the latest batch of top Spanish-freestyle MCs from every pocket of the U.S. Each MC submitted a freestyle video flexing their lyrical skills during the application phase in April, and these submissions were judged and ranked by a panel of experts. Rappers selected include Red Bull Batalla veterans such as OG Frases from Miami as well as Boss and Chester, two returning qualifiers from Los Angeles.

Fan favorites and new talent will have the chance to compete to take the Batalla 2021 crown, the biggest prize in Spanish-speaking freestyle rap. New to this season are on-the-rise talent like G.I.O, MAU and Piwie, who has never performed live. In addition to these up-and-coming hip-hop stars, the top three finalists from the 2020 competition— Yartzi, last year’s U.S. Champion from Puerto Rico, El Dilema a 2020 finalist from New York and Jordi, who ranked third in 2020—are all invited to return directly to the U.S. finals.