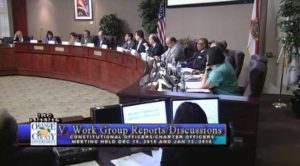 A Charter Review Commission Work Group voted unanimously yesterday on a controversial referendum proposal which would make all Orange County Constitutional offices into Charter offices instead. The “clean-up” referendum is being suggested by General Counsel Wade Vose, following instructions he received from the Commission’s request at its March meeting because of uncertainty due to an ongoing legal challenge initiated by Sheriff Jerry Demings, Tax Collector Scott Randolph and Property Appraiser Rick Singh. The legal challenge stems from the passage of a successful 2014 charter amendment. The proposed language is likely to cause more controversy between the Constitutional officers, the CRC, Mayor Teresa Jacobs and the County Commission.

Attorney Vose was asked “to determine whether any potential action of the CRC could be taken to preserve the substance of the 2014 charter amendment providing for non-partisan elections and term limits for county officers, in the event Orange County is not successful in its defense of that charter amendment,” according to a memo sent to the Charter Review Commission signed by Vose. The memo also provided additional information regarding the pending litigation in order to provide the CRC with an update on the status of the case.

In an abundance of caution and in an attempt to prevent more legal battles, the work group decided that turning all Orange County Constitutional officers into Charter officers moving forward is the best recommendation to send to the Charter Review Commission. The CRC typically rubber stamps all recommendations that come from work groups like this or that are favorable to the business community.

“In addition to the direction the CRC provided me at its March 28, 2016 meeting to determine whether any action of the CRC could be taken to preserve the substance of the 2014 charter amendment, the CRC also directed that any such resulting charter amendment should be narrowly tailored to specifically address that issue, while avoiding as much as possible, collateral effects on the formerly constitutional officers,” Vose wrote in his memo. “The draft ballot and charter language provided below are an attempt to accomplish these dual goals. Specifically, the provisions of the new Section 703.B., and revisions to Sections 706 and 709 are addressed to concerns expressed by the six constitutional officers during both the 2012 and 2016 Charter Review Commission deliberations.”

Also surfacing from the meeting, new rumors that the Charter Review Commission may vote to expand the County Commission by two additional members by 2020. It is possible that measure could be added to the “clean-up” referendum as well, which would make the referendum more appealing to some voters.

“While the 2016 CRC’s general practice has been to defer preparation of charter and ballot language, because the requested analysis goes directly to addressing specific legal issues relating to charter and ballot language and mechanics, a draft of both have been prepared for review and consideration, subject to the absolute discretion of the CRC to use them as it sees fit,” Vose added.

The Constitutional/Charter Officers Work Group voted 5-0 in favor of the recommendation.

Here’s a copy of the proposed charter language:

A. The offices of the Sheriff, Tax Collector, Property Appraiser, Supervisor of Elections, and Clerk of the Circuit Court, created pursuant to Article VIII, Section 1(d) of the Florida Constitution, and the office of the Comptroller, created pursuant to Chapter 72-461, Laws of Florida, are hereby abolished and all duties prescribed by the Constitution, general law and Chapter 72-461, Laws of Florida, for each office are hereby respectively transferred to the office of the Sheriff, office of the Tax Collector, office of the Property Appraiser, office of the Supervisor of Elections, office of the Clerk of the Circuit Court, and office of the Comptroller. These offices shall have terms of four (4) years commencing on the dates provided by law for their corresponding county offices, and shall be nonpartisan, elective charter offices.

B. Except as expressly set forth in this Charter or otherwise provided by law, these offices shall not be subject to the authority of the board of county commissioners or the county mayor. These offices shall have all rights and privileges of their corresponding county constitutional offices not inconsistent with the provisions of this Charter.

D. Any charter officer specified in Section 703(A) who has held the same office or its corresponding county constitutional office, in aggregate, for the preceding four (4) consecutive terms is prohibited from appearing on the ballot for reelection to that office; provided, however, that the terms of office beginning before January 1, 2015 shall not be counted.